Daughter's Day 2021: In Which Shilpa Shetty Is Samisha's Loudest Cheerleader. They Are BFFs After All 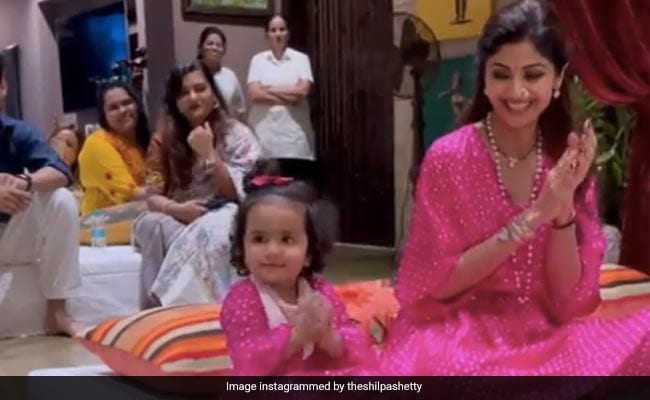 Daughter's Day 2021: Shilpa Shetty with Samisha in a still from video (courtesy TheShilpaShetty)

It's Daughter's Day and hence, it's no surprise that Shilpa Shetty found out the most adorable video of daughter Samisha and shared it on social media. Happy Daughter's Day to US, mine and ours," the 46-year-old actress captioned her post. As a celebration of Daughter's Day, Shilpa Shetty shared a video from the previously held Ganesh Chaturthi celebrations at her home. In the video, Samisha can be seen having a blast during the aarti with Shilpa Shetty cheering her on. "Thank you, Samisha, for choosing me. I promise you that even though we've been mother-daughter from the start, we'll always be best friends forever from the heart. Love you, my baby!" Shilpa Shetty wrote in her post.

Shilpa Shetty is also a parent to son Viaan he just celebrated his 9th birthday earlier this year. Shilpa Shetty welcomed daughter Samisha via surrogacy last year. Shilpa had shared this bunch of photos with Viaan and Samisha from the Ganesh Chaturthi celebrations earlier.

On Brother's Day, Shilpa Shetty posted this cuteness overloaded video of Viaan and Samisha catching up: "Having a younger sibling somehow makes the older one responsible, protective, mature, and even territorial."

In terms of work, Shilpa Shetty was last seen in Priyadarshan's comedy Hungama 2, which released on Disney+Hotstar earlier this year. Shilpa Shetty recently returned to work - as a judge on Dance Deewane 4 - after a hiatus following the arrest of her businessman husband Raj Kundra in a case involving pornographic filmmaking. Raj Kundra was granted bail by a Mumbai court last week, two months after his arrest.