National Awards: Rahul Khanna shared a blast from the past after Vinod Khanna was honoured posthumously 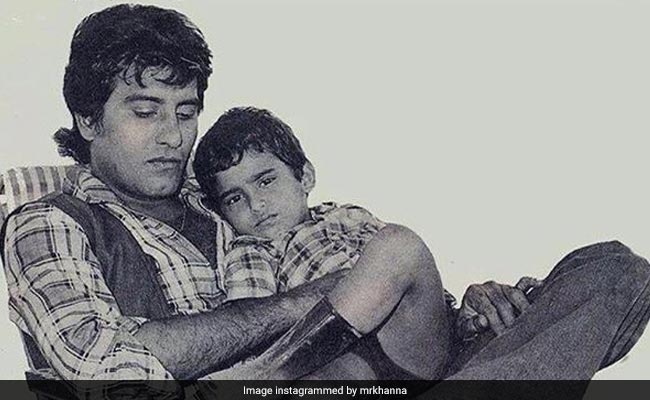 A throwback photo of Vinod and Akshaye Khanne (courtesy mrkhanna)

New Delhi: At the 65th National Film Awards on Thursday, actor Vinod Khanna was posthumously honoured with the Dadasaheb Phalke Award - India's highest film honour - and prompted an emotional post from actor-model Rahul Khanna, the late actor's elder son. Vinod Khanna's younger son, actor Akshaye Khanna and wife Kavita collected the prize at a ceremony in New Delhi's Vigyan Bhawan on Thursday. Remembering his father, Rahul shared "one of his favourite photos" on Instagram, starring Akshaye and Vinod Khanna. "On such a proud and emotional day - as my dad is posthumously awarded India's highest honour in cinema, the Dadasaheb Phalke Award at the National Film Awards and Akshaye accepts it on behalf of all of us - throwing back to one of my favourite photos of them both on one of his film sets, c. 1980," he captioned the blast from the past.

On such a proud and emotional day-as my dad is posthumously awarded India's highest honour in cinema, the Dadasaheb Phalke Award at the National Film Awards and Akshaye accepts it on behalf of all of us-throwing back to one of my favourite photos of them both on one of his film sets, c. 1980! #tbt #throwbackthursday

At Thursday's ceremony, the legendary actor was paid a memorable tribute to commemorate his stupendous contribution to Indian cinema. A montage of his best-known films was played out with several of his colleagues - Amitabh Bachchan, Rishi Kapoor, Gulzar, Madhuri Dixit, Hema Malini and Prem Chopra - sharing their fond memories of the "versatile actor."

Vinod Khanna's wife Kavita, who accepted the award from President Ram Nath Kovind, also made an appearance in the video and shared a heart-warming message: "I very much feel is absence but more that his absence I feel his presence."

#PresidentKovind confers Dadasaheb Phalke Award for the year 2017 to Late Vinod Khanna, who featured in as many as 146 films in a career spanning over 4 decades. He left behind a legacy that will stay etched in our memories for years to come.#NationalFilmAwardspic.twitter.com/JVY3DKRjNa

Promoted
Listen to the latest songs, only on JioSaavn.com
Vinod Khanna died last year and his funeral was attended by the likes of Amitabh Bachchan, Rishi Kapoor and other A-listers of the film fraternity. The late actor is best remembered for his memorable roles in films like Amar Akbar Anthony, Qurbani, Achanak, Hera Pheri, Muqaddar K Sikander. He was last seen in Shah Rukh Khan's 2015 film Dilwale.