Sonam Kapoor received a Special Mention at the 64th National Film Awards for her performance in Neerja. Anil Kapoor says that he is a proud father 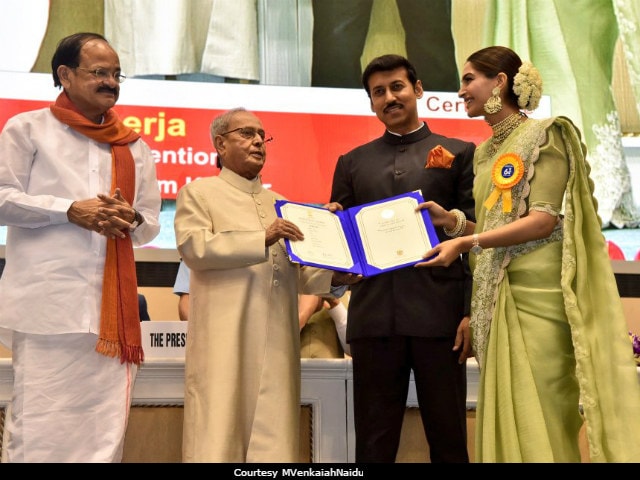 New Delhi: Actress Sonam Kapoor received a Special Mention at the 64th National Film Awards for her performance in Neerja. Anil Kapoor, who couldn’t hold his excitement when Sonam received the award, says that he is a ‘proud father,’ reports news agency IANS. "Any family will be proud if there is any member of the family winning a National Film Award. It might be a son, daughter, wife, friend or anyone who is part of the family. Of course, it's the first one for Sonam so we all are really excited," Anil Kapoor told IANS. Sonam, 31, played airhostess Neerja Bhanot, who lost her life while saving passengers on a hijacked plane.

Sonam received her National Award from President Pranab Mukherjee in New Delhi on May 3. Parents Sunita and Anil Kapoor and rumoured boyfriend Anand Ahuja accompanied Sonam for the ceremony.

Anil Kapoor like every other father adorably clicked her daughter’s pictures while she took the prize while Sunita and Anand cheered her. Soon after Sonam received the National Award, Anil Kapoor tweeted about his ‘excitement.’

"I think it's an immensely proud moment for the entire family and it inspires one to work harder and be humble. Working with great directors, being honest and following guts (should be the goal), which is what Sonam has done, which is what I am going to do. I think eventually hard work pays someday," Sonam’s brother Harshvardhan told IANS.

Promoted
Listen to the latest songs, only on JioSaavn.com
Sonam Kapoor is currently filming Padman with Akshay Kumar. She will also be seen in Veere Di Wedding, with Kareena Kapoor Khan and Swara Bhaskar.