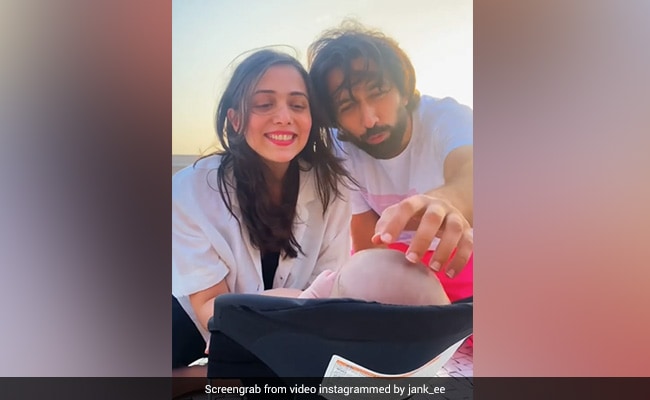 Nakuul and Jankee in a still from the video. (Image courtesy: jank_ee )

TV actor Nakuul Mehta and his wife Jankee Parekh occupied a spot on the list of trends on Friday, courtesy a video in which the couple can be seen singing a song to their baby son. The duo welcomed their son Sufi on February 3. In Jankee Parekh's latest video on Instagram, she can be seen singing The Cuppycake Song with the actor to their little "muffin." The couple can be seen twinning in white outfits in the video. "Singing 'The Cuppycake Song' for our little muffin," Jankee Parekh wrote in the caption. Check it out here:

Sufi has undergone a surgery recently after he was diagnosed with Bilateral lnguinal Hernia. Sharing how she prepared her baby for the operation, Jankee Parekh wrote in an Instagram post: "Almost thought would not share this, but seeing so many of you open up your lives to me, I feel so much more courage to share my story, now. 3 weeks ago, our little 'Sufi' was diagnosed with Bilateral lnguinal Hernia and the doctors advised immediate surgical intervention. In spite of it being a safe surgical procedure in infants, just the thought of having my little one having to undergo a surgery under general anesthesia broke my heart. The day I found out, tears wouldn't stop."

"My next 3 nights went in preparing him for the procedure. What worried me was the fact that he had to fast for 4 hours before and 2 hours after surgery as he was going to be administered anesthesia. So, until the day of the surgery, I would wake him up every night at 3 am, feed him & then time his sleep pattern making sure that he doesn't wake up for the next 4.5 hours & if he did, I didn't feed him immediately. My plan was to mimic the day of the surgery, so that his body clock gets trained for the procedure & he doesn't wake up earlier & ask for milk. Besides that, I kept talking to him about how he needs to sleep for longer on that day, how we are going to get through this together. He would keep staring at my face & listen attentively. Or atleast that's what I thought," read another excerpt from her post.

Neha Kakkar And Rohanpreet Singh Are Celebrating 6 Months Of Being Married. See Pics