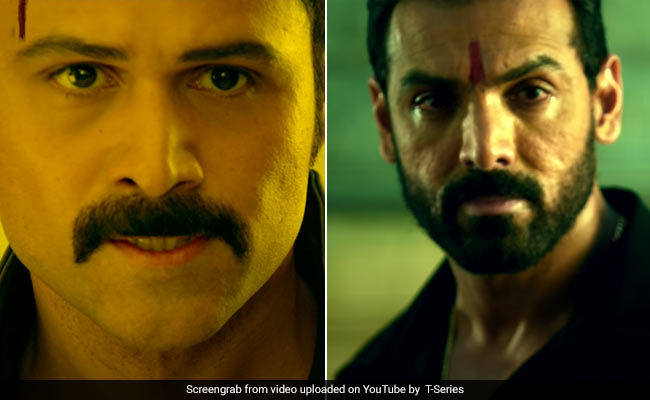 John Abraham is back again with a crime-thriller and we can't keep calm. The teaser of the actor's much-anticipated film Mumbai Saga, co-starring Emraan Hashmi, dropped on the Internet on Wednesday and it will blow your mind. John plays the role of a deadly gangster named Amartya Rao, who wants to dominate the Bombay underworld in the Eighties and the Nineties, before the city was renamed to Mumbai. Emraan Hashmi features as a no-nonsense cop, who is hell-bent on destroying Amartya's reign and is determined to make Bombay violence-free. The teaser introduces John Abraham as a gangster who "rose from the streets of Bombay to rule Mumbai" and Emraan as a cop who "rose from the ghettos of Bombay to stop" Amartya Rao.

Mumbai Saga marks John Abraham and Emraan Hashmi's first project together. The film was earlier scheduled to release in June last year but its shooting schedule got postponed due to the coronavirus outbreak, which lead to the nation-wide lockdown. The stars resumed the shoot in Ramoji Film City in compliance with the guidelines given by Producers Guild Of India in July last year and completed it in 12 days.

Check out the first look posters of John Abraham and Emraan Hashmi as a gangster and a cop in Mumbai Saga, respectively.

One of my favourite moments from MUMBAI SAGA.
And of course Mr. Abraham like never before. pic.twitter.com/ooKz6wvt1l

Everyone on team MUMBAI SAGA was anxious about how @emraanhashmi
would pull off the deadly cop's look.
Just look with what style he has pulled it off. pic.twitter.com/BdB2FuYLoB

John Abraham has previously played the role of a gangster in Sanjay Gupta's 2013 film Shootout At Wadala. We have also seen Emraan Hashmi playing the role of a cop in a few films like Zeher and Murder 2.