"One of my favourite moments from Mumbai Saga," wrote Sanjay Gupta 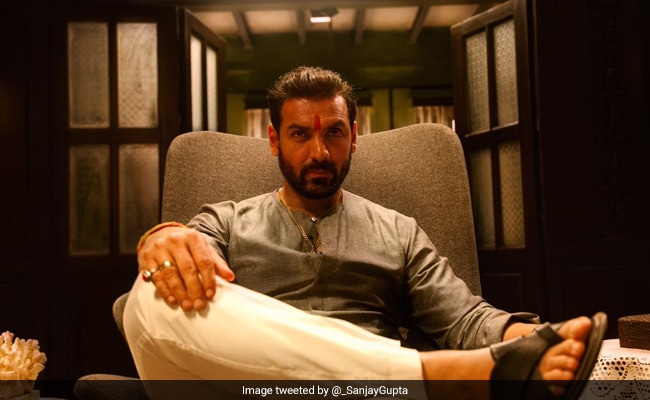 John Abraham, who portrayed the role of a police officer in his last few projects, will be seen playing the role of a gangster in Sanjay Gupta's Mumbai Saga. On Monday, Sanjay Gupta shared John Abraham's first look from the film and intense is how we would describe it. John can be seen dressed in a kurta-pajama set as he intensely stares into the camera in the picture. The film's director Sanjay Gupta put everything into perspective when he wrote "John Abraham like never before." Sanjay Gupta captioned the post: "One of my favourite moments from Mumbai Saga and of course Mr Abraham like never before."

One of my favourite moments from MUMBAI SAGA.
And of course Mr. Abraham like never before. pic.twitter.com/ooKz6wvt1l

Set in the Eighties and the Nineties, Mumbai Saga also stars Emraan Hashmi, Jackie Shroff, Suniel Shetty, Prateik Babbar, Gulshan Grover, Rohit Roy, and Amole Gupte in pivotal roles. In June last year, Sanjay Gupta shared a picture of the film's cast on social media and he wrote: "The legend of Bombay, the saga of Mumbai. Presenting the gangsters of Mumbai Saga." ICYMI, this is the post we are talking about:

In an interview with news agency IANS last year, the film's director Sanjay Gupta described Mumbai Saga as his most "ambitious project" and told IANS: "After 25 years and 17 films, I had to give my audience something bigger and better. Mumbai Saga is by far my most ambitious film which needed a visionary producer."

The film has been co-produced by Bhushan Kumar, Krishan Kumar and Anuradha Gupta. Speaking about the project, Bhushan Kumar in an IANS interview said, "Mumbai Saga is our first in the gangster drama genre and who's better than Sanjay to direct it. The film is inspired by true events yet makes the characters so larger than life. The entire cast will bring so much to the table."