"My day has begun with tremendous gratitude and love in my heart," wrote the actress. 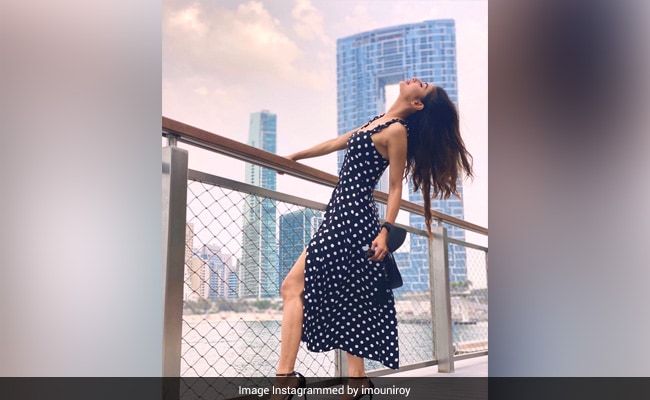 Actress Mouni Roy had a bright Sunday morning and her latest Instgram post is proof. Mouni posted a stunning set of pictures on the photograph sharing application. The actress, who is currently staying in London (going by her latest Instagram entries), can be seen happily posing for the camera in a black dress with white polka dots. The caption on Mouni Roy's post read: "My day has begun with tremendous gratitude and love in my heart, and my favourite song and am dancing to its tunes. What about you?" TV actor Arjun Bijlani, who co-starred with Mouni in Naagin, wrote "Mona," adding a heart emoji. Other TV stars like Aamna Sharif and Aashka Goradia, who happen to be Mouni's friends, also dropped a few heart emojis in the comments section.

My day has begun with tremendous Gratitude & love in my heart & my favourite song and am dancing to it tunes. What about you ? @anishavarma

The actress was staying at her friend's house in Abu Dhabi before flying to London. ICYMI, take a look at some of the posts from Mouni's London diaries:

Love & kisses to all the dreamers, lovers & artists!x P.s I have a lot of pictures from that day

Mouni Roy has been a part of television shows such as Kasturi, Devon Ke Dev...Mahadev and Naagin. She has also participated in reality shows like Nach Baliye 6, Jhalak Dikhhla Jaa 7 and Zara Nachke Dikha.

She made her Bollywood debut with the 2018 sports drama Gold, starring Akshay Kumar. Her last film was Made In China, in which she co-starred with Rajkummar Rao. The actress will next feature in Ayan Mukerji's Brahmastra, in which she will share screen space with Amitabh Bachchan, Ranbir Kapoor and Alia Bhatt.