In the pictures, Mouni Roy looks gorgeous in a pink dress 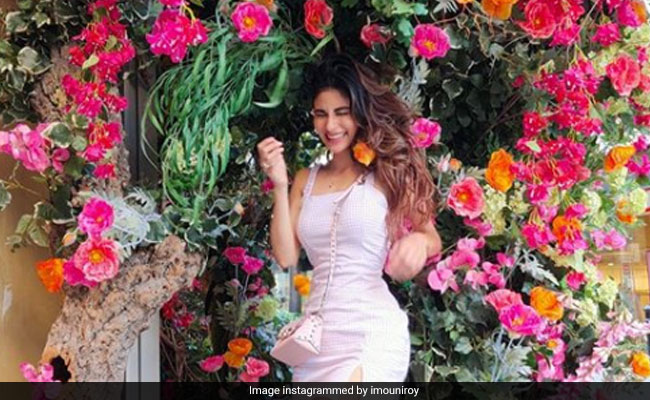 Actress Mouni Roy, who is currently living in London, lit up Instagram with her latest entry. The actress shared a set of stunning pictures of herself and left her fans wanting more. In the vibrant photos, Mouni Roy can be seen posing under a bougainvillea canopy. She looks gorgeous in a pink dress, which she paired with a sling bag and white sneakers. Sharing the photos, Mouni Roy captioned them perfectly. She wrote: "Good vibes only." The actress' fans flooded her post with comments such as "gorgeous," "beautiful" and "you always look awesome." Here's the post we are talking about:

Mouni Roy has been living in London for quite some time now. The actress, every now and then, shares pictures to show her fans how she has been keeping herself busy in the city. A couple of days ago, she shared a photo album featuring herself and two of her friends. "Our secret garden and a secret little garden party," she captioned the post.

Check out some more pictures from Mouni Roy's London album:

"Work in a Manor" life for a couple of days! #theabbeylife #obsessedwiththeunrealskies

In terms of work, Mouni Roy made a debut in Bollywood with Akshay Kumar's Gold. She became a household name for her breakthrough role in television show Naagin. The actress has also featured in John Abraham's Romeo Akbar Walter. Mouni Roy was last seen in Made In China, which also stars Rajkummar Rao, Paresh Rawal, Boman Irani, Gajraj Rao and Sumeet Vyas. She is also prepping for Ayan Mukerji's Brahmastra, in which she will co-star Ranbir Kapoor and Alia Bhatt.