Mouni Roy's Pic Of Herself In Wheelchair Prompts Concerned Comments 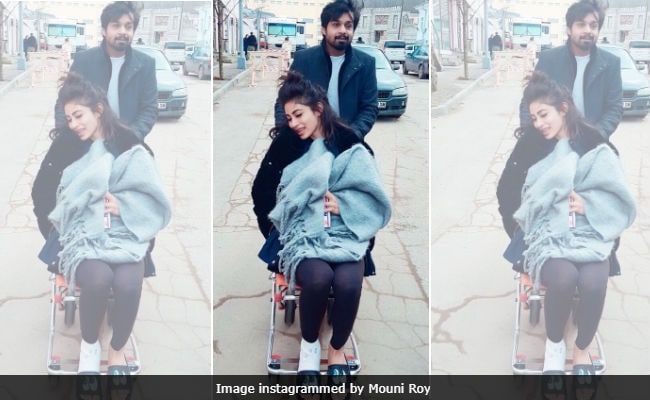 New Delhi: Mouni Roy latest post to wish her friend Hussain Dalal on Instagram prompted concerned tweets from fans as it shows Mouni on a wheelchair with her right foot strapped in bandage (or is that a plaster?). In her post, the 32-year-old actress wrote: "...Also one must never forget and take kindness for granted. Will always be thankful for the long wheelchair ride on the fretted day." It is unclear if the picture is a latest from the sets of Brahmastra, which Mouni is currently filming or if it was taken earlier. But fans of the Naagin actress are extremely concerned. "Get well soon" messages have flooded the comments thread. Many Instagram users are curious to know what has happened.

Of all the stories you write my favourites aren't the ones with human characters but ones with the wind making music , empty streets , snowed bicycles, open lone stages and a few human shadows in the bg. Love all the short & long stories ; even the ones you hvnt written yet !!! (am sure i ll like em wen i read em) Happy birthday @hussain.dalal Be 'joy' always ! Also one must never forget & take kindness for granted. Will always be thankful for the long wheelchair ride on the fretted day

Mouni had posted another picture yesterday tagging Hussain Dalal, in which both her feet appeared to be fine.

The you read in a day that stays with you for life Funny , me & @hussain.dalal are probably the only two people reading it all grown up aand coincidentally started reading it together P.s @hussain.dalal you finished yours ? P.p.s (Kal kiska birthday hain?) #TheLittlePrince #AntoineDeSaintExupery

Hussain Dalal is an actor and writer, who has written dialogues for Karan Johar's Yeh Jawaani Hai Deewani and 2 States. Hussain is a part of Karan Johar-produced Brahmastra, where he and Mouni may have crossed paths. Hussain Dalal has also featured in films such as Pizza and A Gentleman. He also appeared as one of the mentors of The Great Indian Laughter Challenge along with Mallika Dua and Zakir Khan.

Team Brahmastra is currently filming in Bulgaria with Ranbir Kapoor and Alia Bhatt, the lead cast of the film. Director Ayan Mukherji has ensured that cast has top tutors for their action sequences.