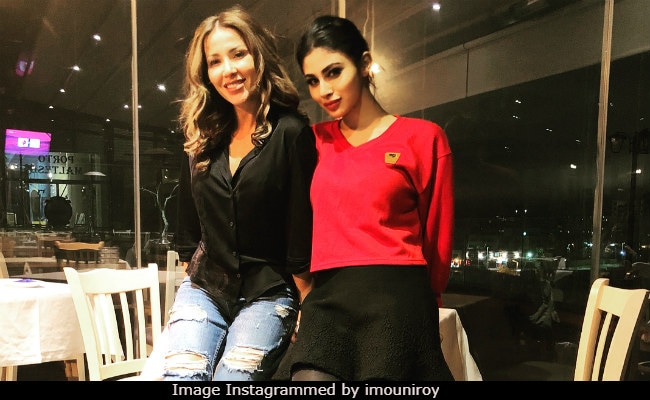 Here's Mouni Roy all the way from Brahmastra (courtesy imouniroy)

New Delhi: Mouni Roy is all set to add shades of grey to Ranbir Kapoor and Alia Bhatt's Brahmastra - the TV star requires to shed some weight for her part in the film, stated her nutritionist Angie Kassabie. Referring to Mouni Roy as "one of the leading stars in India," Angie said she is enjoying her time with the actress: "I am more than happy to be her dietitian and help her dropping weight before her new movie Brahmastra," read her post. Mouni Roy is currently in Bulgaria along with the rest of the film's team. Ayan Mukerji directs her in Brahmastra, the cast of which also includes Amitabh Bachchan.

. One of the leading stars in #India @imouniroy, I am more than happy to be her dietitian & help her dropping weight before her new movie #BrahMastra @ayanmukerji @eshagupta1331 #india #newmovie #imouniroy #indianmovie #angiekassabie #cinema #theater #august2019

In a separate post on Instagram, Mouni Roy revealed Angie Kassabie arrived in Bulgaria during the last schedule of the film and that she's been a majorly instrumental in helping her with the diet. This is how Mouni thanked her on Instagram: "Dearest Angie, thank you so much for coming through for me in the last few days and helping me with my diet in the most effective way. And it's lovely to meet someone who helps others with such selflessness. Shall always be grateful for you and the knowledge that you have of human anatomy and nutrition."

Dearest Angie @angiekassabie thank you so much for coming through for me in the last few days and helping me with my diet in the most effective wayAnd its lovely to meet someone who help others with such selflessness. Shall always be grateful for you & the knowledge that you have of human anatomy & nutrition. P.S She s so hot

In January, a report in DNA quoted a source as saying that Mouni has been cast as the antagonist with "shades of grey" but there's been no confirmation from the film's team yet. "Alia will obviously play the damsel in distress, who is Ranbir's love interest in the trilogy. But Mouni will play a villain in the first part. Her character will have shades of grey," read the DNA report.

Brahmastra will be Mouni Roy's second Bollywood film because she's making her Bollywood debut with Akshay Kumar's Gold, which releases in August this year. Brahmastra is a trilogy the first part of which releases next year.
Comments
brahmastrabrahmastra shoot