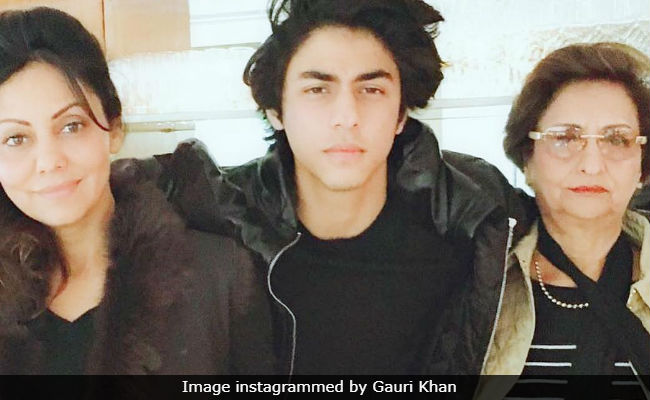 Gauri Khan along with Aryan and her mother Savita Chhibber. (Image courtesy: Instagram)

New Delhi: It is Mother's Day today and social media is flooded with love and how. After Priyanka Chopra, Amitabh Bachchan and other Bollywood celebrities posted pictures with their mothers on social media, it was Gauri Khan's turn. The 47-year-old interior decorator shared a picture featuring her mom Savita Chhibber and her 20-year-old son Aryan Khan on social media. Too much love in one frame, we must say. The picture features members from the three generations of her family. Gauri captioned the post: "Happy Mother's Day". The post received a lot of affection from fans and over 45,000 likes on Instagram. Comments like "lovely family" and "what a beautiful picture" started pouring in.

It wouldn't be wrong to say that Gauri Khan loves sharing pictures of her family on social media. She frequently posts pictures of husband Shah Rukh Khan, their 14-year-old daughter Suhana Khan and 4-year-son AbRam Khan, who has wooed the Internet with his cuteness on several occasions. Earlier this month, Gauri Khan uploaded a selfie featuring Shah Rukh Khan and Aryan, which went viral for the father-son duo's uncanny resemblance.

Promoted
Listen to the latest songs, only on JioSaavn.com
Gauri Khan married Shah Rukh in 1991 and the couple endorses a home-furnishing brand together. She is the co-owner of Red Chilies Entertainment and has produced films like Om Shanti Om, Chennai Express and Dilwale (all the films featured Shah Rukh Khan) among others. Gauri will be producing Shah Rukh Khan's next movie Zero, which will also feature Anushka Sharma and Katrina Kaif.