Yash and Radhika Pandit are giving us major goals 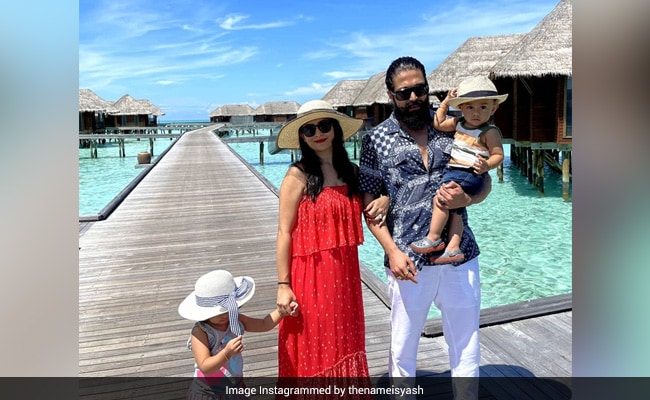 Yash with his family. (courtesy thenameisyash)

Pictures from Yash and Radhika Pandit's vacation keep getting better and better. The KGF star, who checked into Maldives earlier this week, has actively been posting pictures from his getaway with his family. On Wednesday night, Yash added more set of pictures, in which he can be seen having a great time along with his wife Radhika Pandit and their kids Arya and Yatharv. Earlier, posting pictures from his Maldives vacation album, Yash wrote in his caption: "If there was a tropical paradise... Then this would be it! Maldives...Here we come."

This is what Yash posted:

Here are some pictures shared by Radhika Pandit

ICYMI, this is how much fun the star couple are having in the island nation:

In October 2019, Radhika Pandit and Yash welcomed their second child - a baby boy named Yatharv. The couple met on the sets of TV show Nandagokuland and they have worked together in films such as Drama, Mr And Mrs Ramachari and Santhu Straight Forward. They stepped into the Kannada film industry with the 2008 film Moggina Manasu. Yash and Radhika got married in December 2016 and they welcomed their first child Ayra in December 2018.

Yash's  next project is the sequel to his blockbuster film KGF: Chapter 1. The sequel - KGF: Chapter 2 boasts of an impressive star cast that includes Bollywood veterans Sanjay Dutt and Raveena Tandon. The film will reportedly release this year. Yash is also known for his performances in films such as Rocky, Kallara Santhe, Gokula, Thamassu, Modalasala, Kirataka, Lucky, Chandra among others.