KGF Actor Yash Is Vacationing With His Family In Maldives. Pics Here

The actor took off to the island destination on Monday 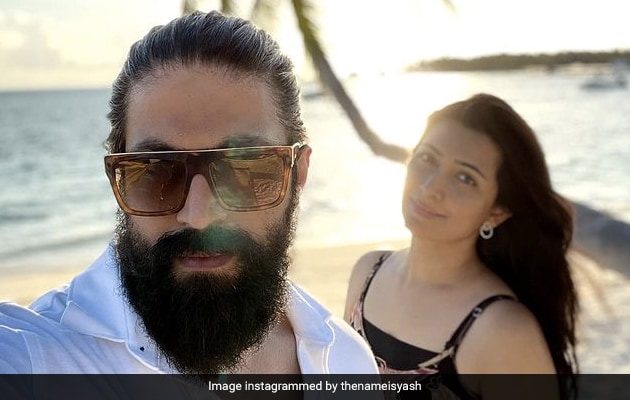 South star Yash, known for his performance in KGF: Chapter 1, is currently vacationing with his family in the Maldives. The actor took off to the island destination on Monday and shared pictures from his trip later in the evening. In one of the pictures, Yash and his wife, actress Radhika Pandit, as well as their two kids - little son Yatharv and daughter Ayra, can be seen posing for a family photo in front of a chartered plane. Other pictures show Yash capturing the scenic beauty of Maldives. "If there was a tropical paradise... then this would be it! Maldives... here we come!" the actor captioned his post.

See pictures of Yash and his family from their Maldives vacation here:

Yash and Radhika Pandit got married in December 2016. They welcomed their first child Ayra in December 2018 and son in October, 2019. The couple have worked together in films such as Drama, Mr And Mrs Ramachari and Santhu Straight Forward.

Earlier this month, on Yash's birthday, the makers of his upcoming film KGF: Chapter 2 released its teaser and as expected, it trended on top on YouTube for a couple of days. The teaser even made a new record with over 78 million views on YouTube within 24 hours of its release. Watch the teaser of KGF: Chapter 2 here:

In terms of work, Yash has featured in several Kannada movies such as Moggina Manasu, Rocky, Kallara Santhe, Gokula, Thamassu, Modalasala, Kirataka, Lucky, Chandra and Mr. and Mrs. Ramachari among others. He is best-known for his role in KGF: Chapter 1, directed by Prashanth Neel and produced by Vijay Kiragandur. The film's sequel - KGF: Chapter 2 - will reportedly release this year.

"Life Goes On:" Minissha Lamba On Separation, Moving On And More