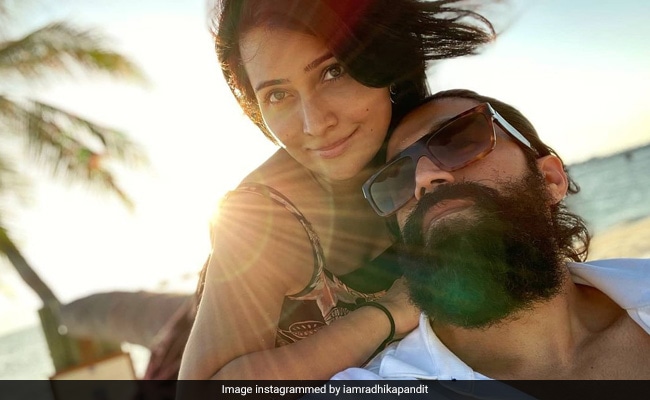 KGF star Yash and his wife, actress Radhika Pandit, are having the time of their lives in the Maldives. The couple, who flew to the beach destination with their kids on Monday, have been sharing glimpses of their vacation on their respective Instagram profile and making us green with envy. On Tuesday, Radhika Pandit posted a sun-kissed picture of herself and Yash and beautiful can't even begin to describe it. In the photo, the actor can be seen sporting a white shirt and clicking a selfie on the beach with Radhika, who can be seen wearing what appears to be a dress.

Earlier, after touching down in the Maldives, Yash posted a set of pictures of himself and his family and wrote: "If there was a tropical paradise... then this would be it! Maldives... here we come!" The photo features the actor posing with his little son Yatharv and daughter Ayra in front of a chartered plane and also on the beach. Check out the pictures here:

Yash and Radhika Pandit, co-stars of films like Drama, Mr And Mrs Ramachari and Santhu Straight Forward, got married in 2016. Two years later, their daughter was born in December, 2018 and they welcomed son Yatharv in 2019.

In terms of work, Yash will next be seen in the sequel to his blockbuster film KGF: Chapter 1. The sequel - KGF: Chapter 2 - also stars Sanjay Dutt and Raveena Tandon. The film will reportedly release this year. Yash is also knowns for his performances in films like Moggina Manasu, Rocky, Kallara Santhe, Gokula, Thamassu, Modalasala, Kirataka, Lucky, Chandra and Mr. and Mrs. Ramachari, to name a few.