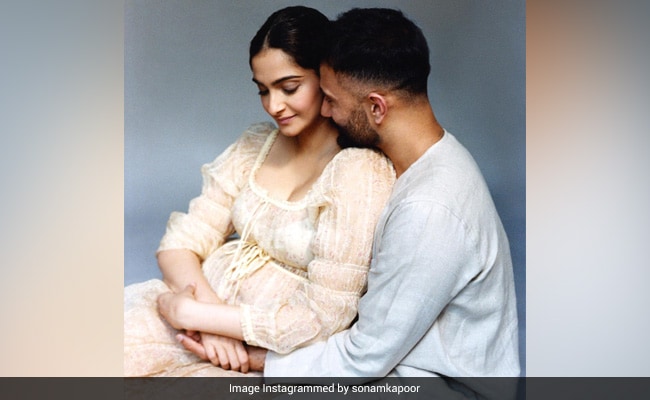 On Tuesday, Mom-to-be Sonam Kapoor shared adorable and mushy photos with her husband Anand Ahuja and captioned them as "Obsessed with you @anandahuja #everydayphenomenal." #Everydayphenomenal is the hashtag that Sonam and Anand have been using in their captions since the day they got married. In the photos, Sonam Kapoor is dressed in a pretty floral dress and Anand is wearing a pastel kurta pajama. Sonam's pregnancy glow is unmissable in the photos. Fans have filled Sonam Kapoor's comment section with red heart and lit emojis.

Sonam Kapoor and Anand Ahuja got married in May 2018 and now, they are expecting their first child. Sonam and Anand had announced the pregnancy news in March. They had shared photos from the maternity shoot and had written, "Four hands. To raise you the very best we can. Two hearts. That will beat in unison with yours, every step of the way. One family. Who will shower you with love and support? We can't wait to welcome you. #everydayphenomenal #comingthisfall2022."

This is not the first time when Sonam Kapoor had confessed that she is "obsessed" with Anand Ahuja. In March, Anand Ahuja had shared photos from the Veg nonveg store launch and Sonam had left not one but two comments. Her first comment had read, "Obsessed with you," followed by a red heart emoji. Sonam's second comment had read, "You're so Hot," followed by a lit emoji.

On the work front, Sonam Kapoor is yet to announce her next project. She was last seen in The Zoya Factor.