Mohit And Antara Wedding Begins: Sonam, Arjun And Anil Kapoor As Baraatis Are All Of Us 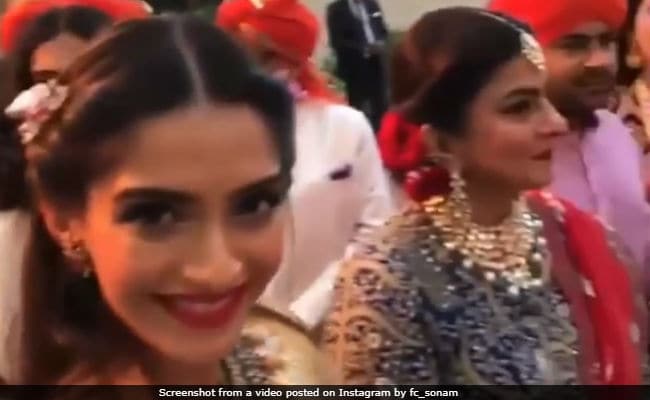 New Delhi: Mohit Marwah and Antara Motiwala's wedding day has arrived and with some inside videos posted by Arjun and Anil Kapoor's fan club, it appears as if the Chacha-Bhatija are having a rocking time as baraatis. Anil Kapoor dancing on Gallan Goodiyaan is all us. In one of the videos, Arjun Kapoor could be seen dancing with other groomsmen on popular Bollywood song Balam Pichkari. After a sun-kissed mehendi ceremony yesterday, followed by a rocking cocktail bash later in the night, Mohit and Antara's are all set to get married. You'll agree that their pre-wedding ceremonies were nothing less than a red carpet event. The wedding ceremonies took place in Al Ras Khaimah in UAE. Check out Anil and Arjun Kapoor's dancing videos from the wedding:

We also caught a glimpse of Sonam Kapoor having a fun time as a baraati.

Mohit's aunt Maheep Kapoor shared the exclusive pictures of the dulha, Mohit Marwah, and we simply can't thank her enough. She first shared a picture of Mohit dressed in a traditional beige bandhgala, off-white churidaar and matching pagadi, as he 'sets off' to lead his groom's wedding procession.

A couple of minutes later, Maheep posted another picture; this time it was her daughter Shanaya performing one of the rituals.

Promoted
Listen to the latest songs, only on JioSaavn.com
Here's what Maheep posted:

Shweta Bachchan, Karan Johar, Athiya Shetty, Siddhant Kapoor are also attending the wedding. We'll keep you updated on all the fun from the wedding, stay tuned!