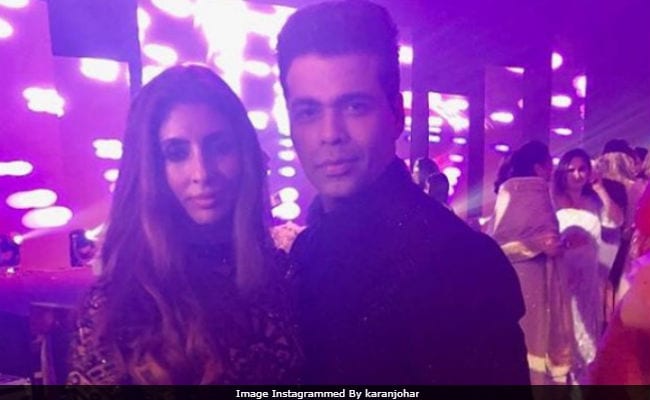 New Delhi: Just like the Kapoors, filmmaker Karan Johar and Shweta Bachchan are also in UAE for actor Mohit Marwah's wedding. Mohit and Antara Motiwala's wedding is scheduled to take place tonight at a resort in UAE's Ras Al Khaimah. Karan Johar posted a picture with Shweta, which appears to be from last night's cocktail party and wrote, "Shaadi posers." He also used the hashtag '#antumoh,' which the Kapoors have apparently fixed as the wedding hashtag. Karan and Shweta are seen twinning in black. Mohit is the son of Reena Marwah, sister of Boney, Anil and Sanjay Kapoor. She is married to Sandeep Marwah, who runs a film studio in Noida. Sridevi, Boney Kapoor, their daughter Khushi, Arjun Kapoor and sister Anshula, Anil Kapoor and his children Sonam and Rhea, Sanjay Kapoor and his family reached the wedding destination on Monday.

A sun-kissed mehendi ceremony was held on Monday afternoon and it was followed by a cocktail night. Sanjay Kapoor, his wife Maheep, Anshula, Rhea and designer Manish Malhotra are constantly updating Instagram with pictures from the festivities.

Sridevi wore a Manish Malhotra couture for the mehendi and was later seen in a Faraz Manan ensemble.

Khushi looked like this. (We miss looking at Janhvi's pictures. She is Sridevi and Boney Kapoor's elder daughter).

Sonam Kapoor appears to have joined her family in the evening. Her picture was shared by fan clubs.

Promoted
Listen to the latest songs, only on JioSaavn.com
Actress Athiya Shetty is also attending Mohit and Antara's wedding.

Mohit Marwah made his Bollywood debut with 2014 film Fugly. He later starred in short films such as Strangers In The Night and Love Shots - The Big Date. Raag Desh was his last film.