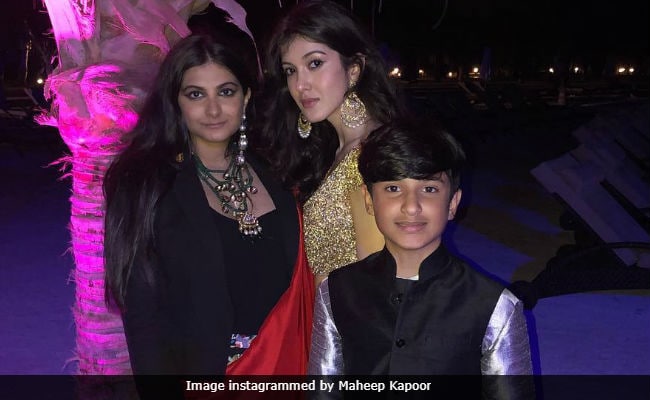 New Delhi: Actor Mohit Marwah's wedding celebrations are in full swing with back-to-back rocking ceremonies. After a sun-kissed mehendi ceremony in Al Ras Khaimah in UAE, the Kapoors geared up for a glitzy cocktail night. Sridevi, Shanaya Kapoor, Rhea Kapoor and the others, dressed in their party best, enjoyed with Mohit and his fiancee Antara Motiwala. Sonam Kapoor, who skipped the mehendi function, joined her family in the evening. She did not post updates on her social media account but fan clubs spotted Sonam in the Instagram stories of other guests. Sridevi, who wore a Manish Malhotra ensemble in the day, opted for Faraz Manan couture for the evening event. Shanaya looked uber-chic at the mehendi function and later in the evening.

Sridevi and Sonam Kapoor at the party last night:

@farazmanan thank you so much for the beautiful outfit

Shanaya's 'proud dad' Sanjay Kapoor shared a picture and captioned it: "You were amazing tonight." Sanjay Kapoor's wife Maheep also shared pictures featuring the other Kapoors and their guests.

Mohit Marwah and Antra Motiwala's wedding ceremony will reportedly take place today. So far, Janhvi Kapoor has missed the first day of the celebrations. Janhvi is probably busy with her work commitments as she is busy filming her Bollywood debut project Dhadak.

Here are some pictures from Mohit Marwah and Antara Motiwala's mehendi ceremony:

Promoted
Listen to the latest songs, only on JioSaavn.com
Mohit is the son of Reena Marwah, who is Boney, Anil and Sanjay Kapoor's sister. His father Sandeep Marwah is the founder of Noida Film City and his younger brother Akshay is a producer. Sonam, Rhea, Arjun, Anshula, Shanaya, Khushi and Janhvi Kapoor are Mohit's cousins.

Mohit Marwah made his Bollywood debut in 2014's Fugly. He followed it up with short films such as Strangers In The Night (directed by Shakun Batra) and Love Shots - The Big Date. He was last seen in Tigmanshu Dhulia's Raag Desh.