After spotting Ranveer in Southall, fans arranged for dhols and greeted Ranveer with complete band baaja and baraat. 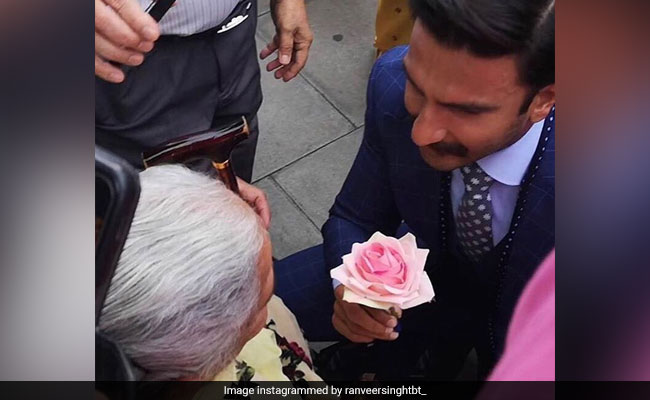 Ranveer Singh, currently shooting for '83 in London, made a trip to Southall for shooting an advert, when fans in the area identified him and went into a tizzy. Videos and photos from Ranveer's Southall expedition are viral on social media, which reveal that the 34-year-old actor was escorted by heavy security as the crowd of fans kept increasing by the minute. Mobbed by fans, Ranveer Singh was spotted ensuring the safety of those who followed him. In one such viral video, the Padmaavat actor can be seen going down on his knees to greet a wheel-chair bound elderly fan. The video shows Ranveer adorably offering her a pink rose and receiving blessings and a kiss from her in return.

| Ranveer Singh Spotted with some lucky fans in London

Meanwhile, after spotting Ranveer in Southhall, fans also arranged for dhols and greeted Ranveer with complete band baaja and baraat. Ranveer also showed his bhangra skills as he joined his fans in the celebrations. Ranveer Singh put life in Southall to a standstill but who cares when you can dance with him.

Take a look at the videos here:

- #RanveerSingh's fans go berserk as he shoots for an ad in Southall, London . . . '"Ranveer's presence created a crowd frenzy when he went there to shoot for an ad. The entire neighbourhood came out on the street to catch a glimpse of Ranveer. The production had made elaborate security plans but they couldn't anticipate the sheer numbers in which people descended on the location to see Ranveer live and in action." - PV. _ The source said, "Ranveer was super calm in spite of the pandemonium, spreading his usual charm and cheer amongst the locals who came in hordes to see him. Very few actors have the ability to handle crowds the way Ranveer does!" _ The insider informed, "He was seen ensuring that women, children and the elderly don't get pushed around in the chaos." Singh was seen telling guards to make sure there is safety. The security took care of everyone and the shoot happened smoothly. " People's Champ ! Can't get enough of these videos ! especially the 2nd & 3rd video ! Just look how happy he is around Elders and him making sure no one get hurt

Ranveer Singh's prolonged London stay is because of Kabir Khan's '83, which is a retelling of India's historic win at the 1983 Cricket World Cup. Ranveer has been cast as cricket legend Kapil Dev, who captained the team in 1983. Deepika Padukone features as Kapil Dev's wife Romi Dev. '83 will mark Ranveer and Deepika's first film together after their wedding.

The wait for Ranveer Singh's '83 will come to an end on April next year.