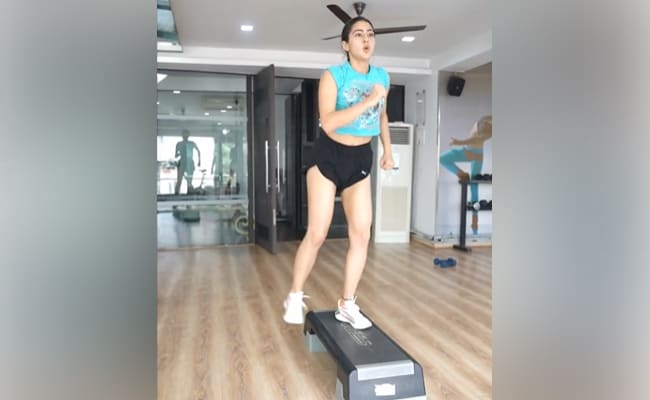 A still from the video. (courtesy: saraalikhan95)

Sara Ali Khan's fitness videos have a separate fanbase and no, we are not exaggerating. The actress, who has always been vocal about her past issues with weight and health conditions such as PCOS, often shares videos of herself killing it in the gym, one complex workout at a time. Now, on Thursday, Sara has shared another clip from the gym. From push-ups to jumps, the star does it all with ease. In the caption, Sara also brought back her famous shayari and said, “It's good to be back. Hogaya holiday come back on track. You must work hard, there's no easy hack.  Just keep going- no time to slack. You cannot crack- so just attack! Oh! And remember to supplement this effort with a healthy snack.”

Just last week, Sara Ali Khan made headlines for her appearance alongside Janhvi Kapoor on the popular celebrity talk show, Koffee With Karan. On the show, both Sara and Janhvi spoke about how they love travelling together to Kedarnath, Los Angeles and Goa. Recalling one of the trips, Sara said, "We decided to go to Bhairavnath and there was a normal path. But we thought ourselves to be better. We chose to hike instead. There was an 85 incline of just rocks and Janhvi was like 'Let us just climb this'." Not wanting to be a “buzzkill”, Sara agreed. "We started climbing up till a point where the rocks were shaking. I kept saying I think we're going to fall," she said, recounting the incident.

Ahead of the episode, Sara Ali Khan and Janhvi Kapoor shared a stunning picture of themselves. The caption reads, “May or may not have spilled one too many #koffeebeans.”

Before that, Sara Ali Khan shared images with her brother Ibrahim and Jeh as well as dad Saif Ali Khan in London. In the caption she said, “Keeping up with the Pataudi's…”

And, even while in London, Sara Ali Khan did not give her workout schedule a miss. Instead, she shared pictures of herself after a workout and said, “You don't take a holiday from work out, you holiday TO work out!

On the work front, Sara Ali Khan was last seen in Atrangi Re, alongside Dhanush and Akshay Kumar.