"50 people before it was a rule," wrote Mira Rajput 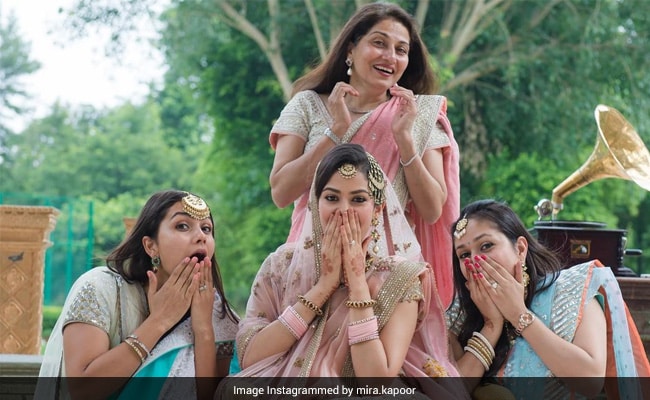 Leave it to Mira Rajput to delight her Instafam with stunning pictures and hilarious captions. In short, a sheer delight. Mira shared a stunning throwback picture from her wedding, in which she can be seen sitting pretty in a pink lehenga, surrounded by her bridesmaids and family members. In the picture, Mira can be seen posing in goofy manner. Enough about the picture, let's talk about her caption. She jokingly made a reference to the current rule for weddings in various states during the pandemic, where only 50 people are allowed to attend a function due to safety issues. Mira captioned her post: "50 people before it was a rule." She added the hashtags #loljk and #gocoronago.

We simply love it when Shahid and Mira appear on each other's Instagram profiles. Which reminds us of a super cute post that Mira shared earlier, which featured her husband but was exclusively about her love for her favourite eatery and the caption on her post read, "Dear Yauatcha, I miss you. I know we had to break up all of a sudden, but the lack of your warm fluffy dimsums isn't doing me any good. I tried, but it seems like life is better with you. Let's get back together? #longdistancerelationship. I promise Shahid Kapoor won't mind."

Here are some more posts of Mira and Shahid Kapoor:

Mira Rajput and Shahid Kapoor got married in 2015 and are parents to a son named Zain and a daughter Misha. Shahid Kapoor is a star of films like Udta Punjab, Haider, Jab We Met, "Padmaavat" and Ishq Vishk. His last film was the 2019 hit Kabir Singh. The actor will next be seen in Jersey, in which he stars as a cricketer.