This picture of the mother-son duo is cuteness overloaded 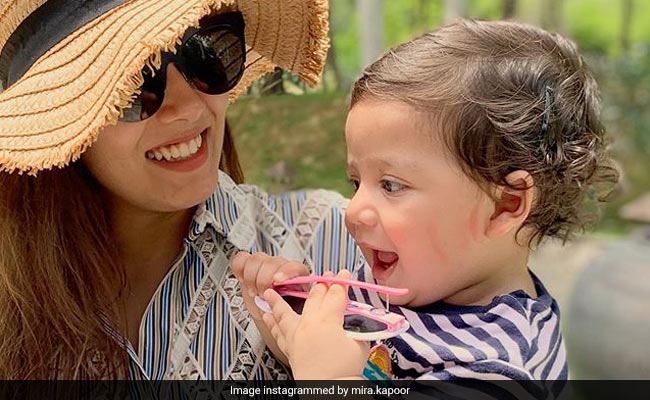 Shahid Kapoor and Mira Rajput's son Zain just turned an year old on Thursday and in order to mark the special occasion, Mira posted an absolutely adorable picture of her little one, who she addressed as "big baby boy" in her caption. In the photograph, Mira can be seen smiling with all her heart as she admires her son. BTW, did we tell you that Zain looks super cute in the picture and his expression is absolutely priceless. Mira accompanied the posy with an equally cute caption and she wrote: "Try and find Zain without a kissie patch.. Happy Birthday to my world." She added the hashtag #BigBabyBoy to her post.

Zain's uncle (Shahid Kapoor's brother) Ishaan Khatter also left a comment on Mira's post and he wrote: "Zizi bear." Mira's post was flooded with birthday wishes for Zain and comments like "cutie pie" and "cuteness." Take a look at the post first, you can thank us later:

Try and find Zain without a kissie patch.. Happy Birthday to my world #bigbabyboy

Isn't this picture of the mother-son duo simply adorable?

Zain frequently makes appearances on his father and mother's Instagram profiles and we simply love it when that happens. Here are some of our favourite pictures featuring Zain:

"You've got this Mama" #babybear #zizou

Besides Zain, Mira Rajput and Shahid Kapoor are also parents to a daughter-named Misha. The couple got married in the year 2015.

On the work front, Mira Rajput made her acting debut in a TV commercial last year while Shahid Kapoor was last seen in the super hit film Kabir Singh, co-starring Kiara Advani, which was a remake of the Sandeep Reddy Vanga-directed Telugu film Arjun Reddy.