Mira Rajput Is Missing This "Bittersweet" Moment From Her Wedding Festivities

Mira Rajput shared a throwback picture on her Instagram profile 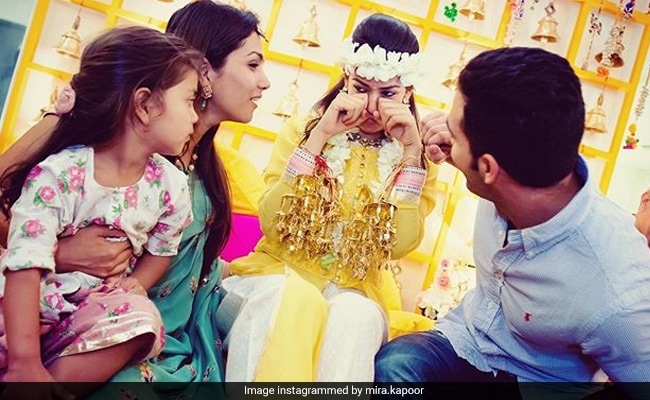 Mira Rajput took a trip down memory lane and returned with an unseen picture from her wedding festivities. Mira got married to Shahid Kapoor in the year 2015. On Thursday, she shared a photograph, which appears to be from the haldi ceremony. Mira Rajput dug out this picture from her archives and said, "Missing the moment." Sharing the picture on Instagram, she captioned it, "Down memory lane...It's the bittersweet memories that are etched most strongly in one's heart. Missing the moment, missing the company, missing the celebration." Here's the picture we're talking about:

Down memory lane.. It's the bittersweet memories that are etched most strongly in one's heart. Missing the moment, missing the company, missing the celebration

Soon after Mira shared this photograph on Instagram, fans flooded her post with comments such as "oh my god, "the best picture," "so pretty, Mira" and "such a sweet picture."

Seen these pictures from their wedding festivities yet?

My strength and weakness #Dad

Mira Rajput, 25, and Shahid Kapoor, 39, got married in July 2015. The couple are parents to a 3-year-old daughter named Misha. She was born in the year 2016. They welcomed their second child Zain in September 2018.

Take a look at this adorable family picture:

Earlier, Mira Rajput opened up about the age gap between the couple in an interview to Vogue, and said, "I really didn't think about it as so many challenges to overcome. The change from Delhi to Mumbai was actually a very pleasant one...His fluidity towards life is another quality I love. It has helped me ease up a lot. He's lived longer, so if anything, I can benefit from his experience and he can benefit from my fresh perspective."

Mira Rajput made her acting debut with a TV commercial in the year 2018.