Mira Rajput Feels Like A Smiley In This Pic. No Points For Guessing Which One 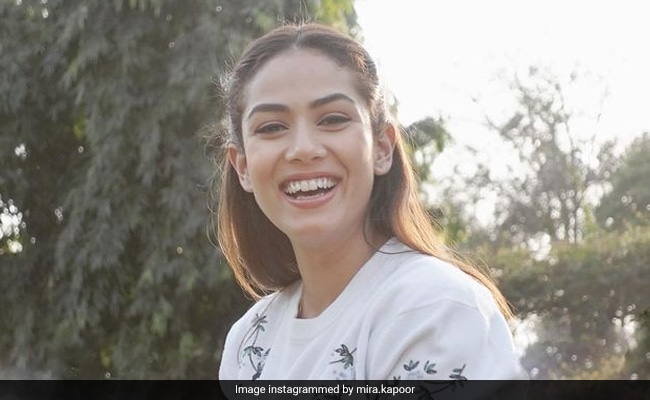 What's in a smile? A thousand words of joy that words can't suffice. What's in Mira Rajput Kapoor's smile? The power to steal our hearts and still make our Friday mornings resplendent. Mira, actor Shahid Kapoor's wife since 2015 and the mother of two kids Misha and Zain, posted a sunkissed photo on Instagram this morning and our hearts feel the warmth. She stands against some trees in a white embroidered top and looks at the camera with a carefree smile. What a sight to watch her gleeful eyes and a sun-kissed brown on her loose hair. Mira knows that words can't express what her lovely smile can. So she chooses only a smiley for her caption.

Mira is big on natural beauty and her smile is one of the most precious glam accessories that we can think of. In a previous post, she had shown us her lovely smile with a caption, "Nat[ural]-Glam."

Mira's yearning for natural simplicity is flowing these days. We knew it when she posted a Reels that showed her decked out with "the softest cotton Kurta", a "thin liner" and "air-dried hair." She called it her "simple summer", and added the song Tujhe Kitna Chahne Lage Hum from Shahid Kapoor's film Kabir Singh. Mira's caption reads, "A Simple Summer. In the midst of contrived outfits, the pleasure of a simple, mismatched salwar kameez is as much satisfying as it is relieving. Loose air-dried hair, a thin liner and the softest cotton Kurta... that's summer."

Guess who commented on her post? Shahid himself. He wrote, "This song is from me to you. You are amazing inside and out."

We know what Mira's smile and natural exuberance mean to her loved ones and her fans. So, our hearts melted when we saw her candidly opening up about missing Shahid. She posted their photo on Instagram with a caption that said Shahid makes her skip a heartbeat and "FaceTime just doesn't cut it."

A week ago, the couple celebrated their sixth anniversary with a slew of photos on Instagram. While Shahid shared a photo on Stories with messages for her, she posted a photo where they both are seen hugging and caressing each other.

In recent years, Shahid made his mark in Bollywood with staggering roles in Kaminey, Haider, Kabir Singh and Padmaavat, to name a few. He is currently busy with the film Jersey.