Mili Review: It has its moments and a pivotal performance that demonstrates that Janhvi Kapoor is an actress who has the chops to carry an entire film on her shoulders. 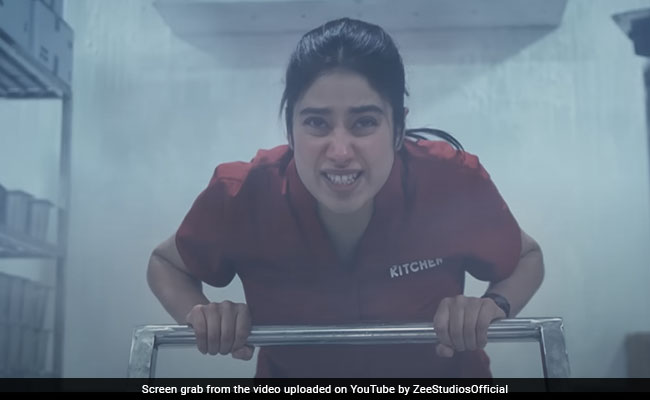 Considering how faithful this repeat act is, one might wonder why director Mathukutty Xavier would have spotted any value at all in helming a Hindi remake of Helen, his own critically lauded 2019 Malayalam survival drama.Mili, co-produced by Boney Kapoor, attempts no significant deviation from the original screenplay.

The setting and some key plot details have been tweaked but in essence Mili treads the path that Helen did. But despite this being the third iteration of the thriller - a Tamil version (Anbirkiniyal) came out last year - the Janhvi Kapoor starrer is a highly watchable, if not scintillating, film.

The lead actress' solid showing in the role of a nursing graduate who is inadvertently locked in a freezer and struggles to stave off hyperthermia is what holds Mili together. Members of the supporting cast, which includes Manoj Pahwa and Sunny Kaushal, are in their elements too. The writing and the acting apart, Mili benefits appreciably from its steadfast eschewal of the superfluous.

The director, working with a script adapted for Hindi movie audiences by Ritesh Shah, imparts sustained intensity and urgency to the girl's fight for survival and the despairing efforts of her father and friends to locate her. The result is a film that keeps the audience glued to the screen in spite of the fact that parts of it could have done with a tighter edit.

Mili is first and foremost a father-daughter story. Janhvi Kapoor plays Mili Naudiyal, a 24-year-old who lives with her doting single dad, Niranjan Naudiyal (Manoj Pahwa), in a quiet middle-class Dehradun neighbourhood. The girl works in a fast-food outlet in a shopping mall while she prepares for an upcoming IELTS test. Mili hopes to migrate to Canada and make a mark as a nurse there.

Niranjan and Mili cannot understandably do without each other, but the man does not stand in the way of his daughter's decision to leave him and their small town behind in search of greener pastures. Although their life seems largely uneventful, father and daughter do have a thing or two that they conceal from each other. One of the secrets has a direct bearing on how things pan out for Mili.

Niranjan smokes on the sly and has cigarettes hidden all over their home. When Mili finds out, she puts her foot down and demands that he kick the habit forthwith. The man promises never to smoke again provided he is allowed a last puff. Mili accepts the deal. They return to their daily routine.

The secret that Mili keeps from her father is far more combustive. She is in love with a jobless man, Sameer Kumar (Sunny Kaushal), who, as is implied in a couple of throwaway lines, belongs to a different caste. (In Helen, the girl is a Christian, the boy a Muslim. The religious divide is kept out of the frame here. Mili also refrains from playing up the caste angle, not that it matters in the overall context of what the film is about).

To return to the storyline, Mili intends to keep her affair with Sameer under wraps until he lands a job - a move that indirectly leads to the life-and-death crisis that befalls her. Trapped in a freezer where the temperature goes as low as -17 degrees Celsius, she stares death in the face with no likelihood of a rescue act being mounted before it is too late.

For her distraught father, finding and saving her becomes a race against time and a battle against the town's policing system. None of Mili's colleagues know where she could have gone after work. The local police station, headed by a smarmy, lethargic sub-inspector Satish Rawat (Anurag Arora), isn't particularly eager to extend any help to a troubled father and his worried neighbours.

Mili is a film executed with sustained control. It neither pulsates with crackling energy nor overflows with plot twists, but it does not waver in terms of its focus on the girl in distress and on how her disappearance impacts her father. It also does well to capture the small-town milieu without overdoing it.

Not that the film harps on it, but the protagonist has two cocoons to reckon with - her home and the town itself. Neither is obviously inimical to her - in fact, they sustain her emotionally - but she desires to break free and explore the wider world. The freezer in the fast-food joint, in a way, serves as an extreme representation of what is a physical cage for an ambitious girl reined in by her life, her environs and her circumstances.

The freezer scenes give Janhvi Kapoor the scope to go the whole distance as an actress. While the make-up comes in handy here she is impressively steady. The heroine tries everything that she can to stay alive. The situation worsens by the minute even as her own nursing skills give her a chance of survival, however slim, in life-threatening conditions that she has no way of fully controlling.

Manoj Pahwa, playing a father at the end of his tether, delivers a performance marked by striking restraint. Even when the alarm bells begin to ring and matters spiral out of control, the actor does not resort to outward methods to express the turmoil raging within in. He allows the situation to determine the performative parameters.

Sunny Kaushal, cast as the boyfriend who is in the line of fire when Mili goes missing without a trace, plays second fiddle in a film that centres squarely on the heroine. He does not let that undermine what he brings to the table. The role has sufficient meat and he makes the most of it.

Mili would have been infinitely sharper and more gripping had it been somewhat shorter. At a little over two hours, it isn't exactly an overlong film, but given the nature of the emergency that the protagonist's accidental confinement sparks - it limits the film to a closed space for the most part - some bits of it feel a touch inessential.

But all said and done, Mili is one remake that is anything but unnecessary. It has its moments and a pivotal performance that demonstrates that Janhvi Kapoor is an actress who has the chops to carry an entire film on her shoulders when she has the screenwriter on her side.

Breathe Season 2 Review: Abhishek Bachchan Does All He Can To Give The Show The Impetus It Needs