Janhvi Kapoor has shared a bunch of images of her OOTD 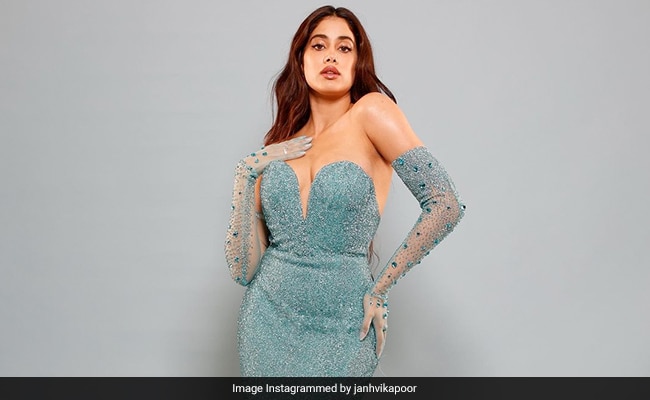 When Janhvi Kapoor drops a photo you have no option but to stop and admire. And, this is exactly what fans did when the Mili star shared a bunch of images of her latest red carpet look. The actress attended an awards show on Wednesday in a Falguni Shane Peacock ensemble. Janhvi, who looked stunning in the outfit that was high on bling, shared her take on the OOTD. Revealing her "vision" in an Instagram post, Janhvi said, “The vision was Botticelli's Venus meets The Little Mermaid,” referring to The Birth of Venus painting by Italian artist Sandro Botticelli and the popular fairy tale character by Hans Christian Andersen. Well, it doesn't get better than that, does it?

The look received a lot of love from fans, who showered her with fire emojis in the comments section.

When not impressing fans with her fashion game, Janhvi Kapoor often shares pictures and videos of her personal and professional milestones. Recently, on the occasion of her father Boney Kapoor's birthday, Janhvi wrote a sweet note. She said, “Happy birthday to the cutest Papa in the whole world. I love you more than you can ever imagine. You're the strongest man I know and I'm the luckiest girl because I get to call you my dad. Love you papa.”

Earlier this week, Janhvi Kapoor also gave fans a tour of her Chennai home as part of an interview with Vogue India. The 25-year-old actress shared that it was bought and decorated by her mother, the late actress Sridevi. “It was the first property that mom (Sridevi) ever bought and it was very different when she bought it and she decided to do it up after she got married,” Janhvi said speaking about the house. Read more here.

In terms of work, Janhvi Kapoor was last seen in Mili. Her upcoming projects include Bawaal and Mr And Mrs Mahi.