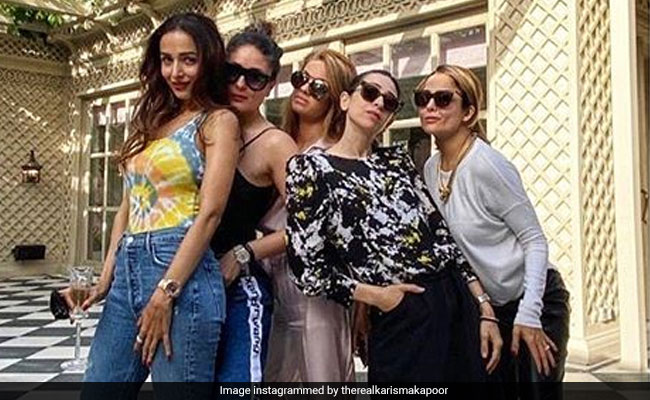 Karisma Kapoor, who awaits the release of her upcoming web-series Mentalhood, shared a post on Instagram. The actress will play the lead role in the show, which is about six "supermoms" going through the journey of parenting. Karisma described it as "motherhood" to "mentalhood" in the trailer of the web-series. On her Instagram post, Karisma Kapoor shared a picture of her "real life mental mom squad." The photo features Karisma and her sister Kareena Kapoor posing along with Malaika Arora, her sister Amrita, and Natasha Poonawalla. Sharing the picture on Saturday, Karisma captioned it: "This is my real life mental mom squad! Do you have one?" She accompanied the post with the hashtags "#momssupportmoms" and "#mentalhood." Take a look at her post:

Karisma Kapoor is a mother to a 14-year-old daughter Samiera and a 9-year-old son Kiaan while Kareena has a son Taimur, who is 3. Malaika Arora's son Arhaan is 17-years-old and her sister Amrita Arora has two kids Rayaan, 7, and Azaan, 10. Natasha Poonawalla has two sons Cyrus and Darius.

Earlier, Karsma had shared a picture of the kids, who feature in the film and wrote, "Meet Meira's naughty but adorable kids! Amyra, Nikhil and Arjun."

Karisma Kapoor also shared this picture while she was busy with the promotional duties of her show and captioned it, "Mentalhood promotions got me like."

Producer Ekta Kapoor shared the trailer of the web-series on Instagram and wrote, "It's finally here, my 3.5 years of labour and this is the trailer of the baby we deliver on March 11. It's takes a village to raise a child and we (all moms) are the village. The rules of parenting have changed. Motherhood ki iss arena mein koi safe zone nahi hai, its an all out war between 6 #Supermoms (In this arena of motherhood there are no safe zones, it is an all-out war between six supermoms). Har parent ki apni-apni strategy hai, sabka apna-apna game, with only one aim - to be the best of the best (Every parent has their own strategy and game with the only aim to be the best of the best)."