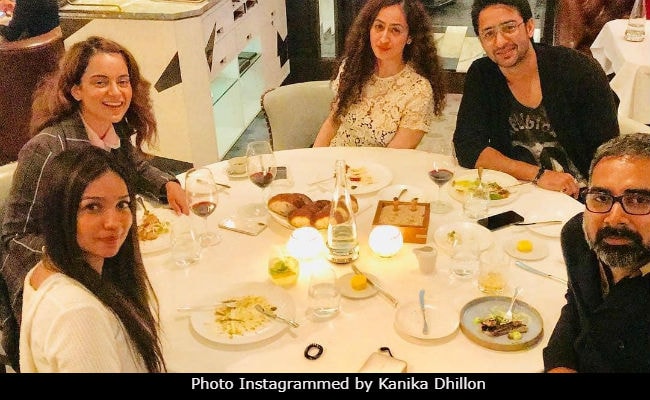 New Delhi: Want to have fun along with work? Take tips from Kangana Ranaut, who is shooting for her upcoming film Mental Hai Kya in London. The actress seems to be having a gala time there, chilling with friends and shopping amidst her work commitments. Kangana is currently filming the second schedule of Mental Hai Kya and a picture of her at a restaurant with the film's team came up. Mental Hai Kya scriptwriter Kanika Dhillon shared the photo on her official Instagram account. Kangana can be seen enjoying her feast with director Prakash Kovelamudi. And surprise, surprise... we also spotted television actor Saheer Sheikh with the group. Will he also be part of Mental Hai Kya? The makers have kept this bit of information under wraps for now. Meanwhile, take a look at Kangana's photo here:

#Repost @kanika.d (@get_repost) Mentals night out... #Mentalhaikya #aboutlastnight @team_kangana_ranaut #prakashkovelamudi @ruchikaakapoor .. Let there be laughter in a glass of wine..let there be madness in the toffee desserts.. have a gin cocktail that makes u insane ...to find that one melody that keeps u sane!

Taking out sometime from her busy schedule, Kangana was also spotted shopping. Kangana accompanied by a friend. Here's the picture.

Let's have some shopping smiles!! #KanganaRanaut spotted shopping in #London in between her #MentalHaiKya shoot. We say the breaktime is being perfectly utilized :p #Queen #shopping #shootdiaries #shootfun #shootlife #picoftheday

Kangana Ranaut's Mental Hai Kay co-star Rajkummar Rao was also in London for the shoot. Both of them indulged in a quirky photo session recently. The photo shared on Instagram by Kangana Ranaut's official fan club, features both the actors at their crazy best. The picture is just a glimpse of what could be cooking on the sets of Mental Hai Kya.

Promoted
Listen to the latest songs, only on JioSaavn.com
Here's a glimpse from their prep sessions, featuring Kangana Ranaut, Prakash Kovelamudi and scriptwriter Kanika Dhillon:

Rajkummar Rao and Kangana Ranaut were earlier shooting for the film with Amyra Dastur in Mumbai. Mental Hai Kya went on floors in May. The film is being produced by Ekta Kapoor and is expected to release by the end of 2018.
Comments
kangana ranautMental Hai Kya