Meet the Bigg Boss 8 Contestants: Who's Here and Why 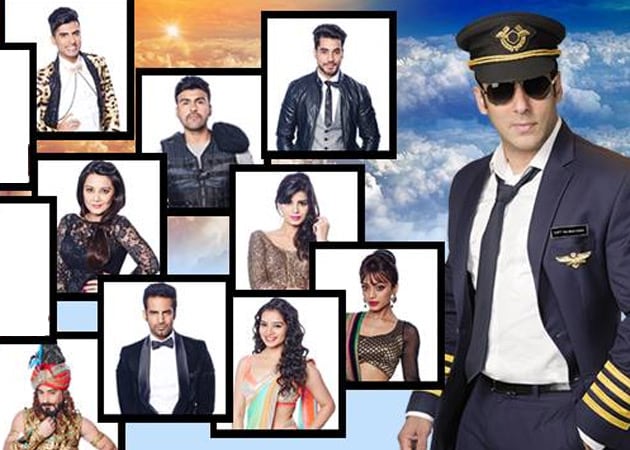 The game show promises to be laced with new plots, twists and devious turns orchestrated by Bigg Boss himself. (Image courtesy: Bigg Boss)

Television's popular celebrity reality show Bigg Boss kick started in the form of a grand event in Mumbai on September 21, with actor Salman Khan playing host for the fifth consecutive time. The game show promises to be laced with new plots, twists and devious turns orchestrated by 'Bigg Boss' himself.

12 contestants boarded the flight for an eventful journey on the game show. While some seek fame, others are banking on the show's reputation to catapult their faded career back into limelight. Some celebs have an agenda while some are here just to have fun. (Also Read: Bigg Boss 8 Begins With Usual Mix of Actors and Models)

Here's a look at all the vimaan ke yatris:

Minissha Lamba: Give it up for Minissha Lamba, who is all set for a tumultuous journey in the new season of this controversial reality show. The actress best known for her roles in films like Kidnap, Bachna Ae Haseeno, Well done Abba is looking up for a fresh start for her faded career with the backing of Bigg Boss.

Sonali Raut: Actress Sonali Raut, who failed to create a stir with her debut film The Xpose, is hoping that Bigg Boss would do that for her. Sonali is considerable new to the industry but seems like she is here to stay.

Karishma Tanna: TV actress Karishma Tanna, who was last seen in hit film Grand Masti is a familiar face for Indian viewers. Having been a part of the small screen for the longest time, she is set to try her luck in the game show which has resurrected many careers.

Natasa Stankovik: Siberian model Natasa Stankovik best known for her item song in Prakash Jha's Satyagraha, Aiyo ji hamri atariya mein, is set to dazzle the small screen with her charm and style. She boarded the Bigg Boss flight with the aim to improve her Hindi. She seems like Mickey Virus actress Elli Avram's replacement for the eighth season.

Diandra Soares: The model who scandalised the fashion world by walking the ramp bald seems to have come to the right place. Diandra, who definitely has a flair for attention is much like model Sofia Hayat, who was last year's wild card entry. Bold and daring, Diandra's journey will be this season's highlight.

Soni Singh: TV actress Soni Singh is all set to put the vamp in her to good use in the show known for its high octane melodrama. The actress was last seen in Sanjay Leela Bhansali's TV Show Saraswatichandra as Kalika.

Sukirti Kandpal: Television's TKD (Tyaag ki devi), Sukirti Kandpal has also boarded the flight for the eighth season of the show. She seems much like Pratyusha Banerjee from last year's season.

Upen Patel: Actor Upen Patel made quite an entry on the show with Salman's favourite Elli Avram. The actor, it seems, is also here to call for a second innings for his drowning career. We have to wait and watch whether Bigg Boss' wand does the trick for Upen.

Aarya Babbar: Veteran actor Raj Babbar's not-so-successful son Aarya Babbar also joined the Bigg Boss bandwagon. The actor was reportedly recruited on Salman Khan's behest for the show. Ironically the actor was introduced by last year's yet another not-so-successful actor Armaan Kohli, who was favoured (despite his hot temper) by the show's host. Salman's favourites somehow always get through the Bigg Boss filter.

Sushant Divgikar: Bigg Boss' house has room for celebs from all walks of life. Sushant Divgikar is this years' representative of LGBT (lesbian, gay, bisexual and transgender) community. In the previous seasons, celebs like Imam A Siddique and Bobby Darling have represented the LGBT community in the show.

Promoted
Listen to the latest songs, only on JioSaavn.com
Praneet Bhat: The show which thrives on its contestants' politicking for their survival has actor Praneet Bhat, who played the role of Shakuni in the recently concluded Mahabharat series.

Gautan Gulati: Actor Gautan Gulati, who plays a minor role in TV series Diya Aur Bati Hum is gearing up for a big role in Bigg Boss 8 too.