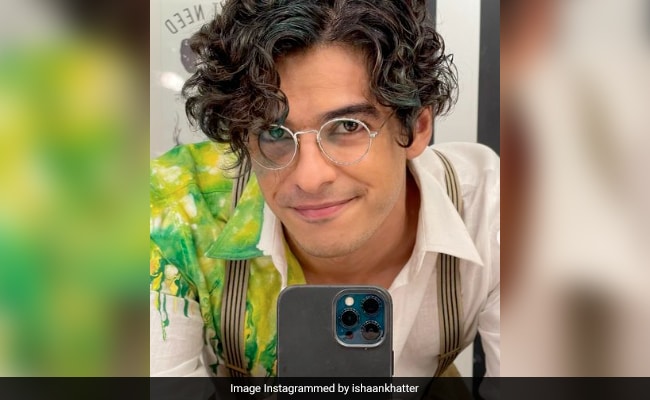 Hey folks, it's time for you to meet one of the talented ghostbusters in Phone Bhoot. We will start with Ishaan Khatter's Galileo Parthasarthy. The actor, on Wednesday, introduced us to his character. Ishaan posted two mirror selfies, where he is seen dressed as his character for the horror-comedy. Curly hair, a pair of round glasses, a white shirt with one half covered in a greenish-yellow design and a watch with a gold dial and brown belt sums up Galileo Parthasarthy's look. Sharing the selfies, Ishaan wrote, “Galileo Parthasarthy (rocket icon). Phone Bhoot in theatres near you (on) November 4, 2022.” Reacting to the picture, Ishaan's fellow ghostbuster Siddhant Chaturvedi commented, “Gulluuuu” with a red heart emoji. Costume designer Poornamrita Singh, who has worked on the film, dropped a green heart icon. The film's screenwriter Ravi Shankaran wrote, “Galileo (heart icon) semma look (fire icon).”

Apart from Ishaan Khatter and Siddhant Chaturvedi, Gurmmet Singh's Phone Bhoot also stars Katrina Kaif. The actress is portraying the role of a ghost in the film.

The makers of Phone Bhoot have, yet again, raised the excitement among their fans by releasing the second song of the film. The track titled Kaali Teri Gutt is a peppy number, crooned by Romy and Sakshi Holkar. It has been composed by Roy and directed by Raju Sundaram. Kaali Teri Gutt is also Ishaan Khatter's “favourite song” from Phone Bhoot.

Watch the song here and tell us if you liked it in the comments section:

Meanwhile, also check out the first song – Kinna Sona - from Phone Bhoot, which will definitely make you groove:

Phone Bhoot will release on November 4. Apart from this film, Ishaan Khatter also has Raja Krishna Menon's Pippa lined up.