Katrina Kaif, Siddhant Chaturvedi and Ishaan Khatter are on a mission to catch ghosts in order to get them to attain moksha 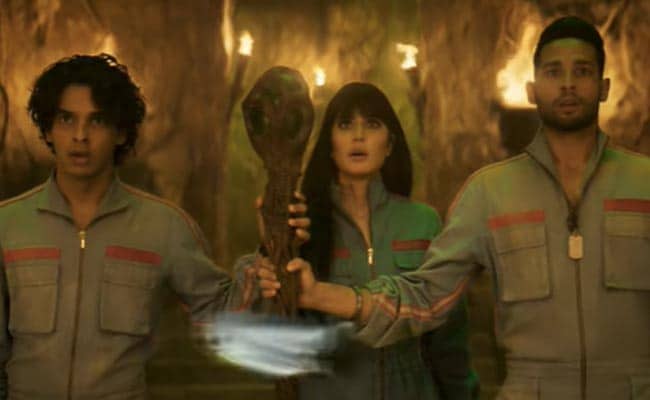 A still from the video. (courtesy: Excel Movies)

Finally, the makers ofPhone Bhoot, starring Katrina Kaif, Siddhant Chaturvedi and Ishaan Khater, have released the trailer. Helmed by Gurmmeet Singh, the trailer opens with Sheeba Chadha standing in the middle of a road in a spooky look while in the background, we can hear, "This story is imaginary. You'll see many evil powers in it but don't be frightened by this movie because it bears no connection to reality." The next scene introduces Ishaan and Siddhant, who have the power to see ghosts. However, their life turns upside down when they meet Katrina Kaif, who plays the role of a ghost in the film. She reaches out to them with a business idea.

In the trailer, they are on a mission to catch ghosts in order to get them to attain moksha (liberation from the cycle of death and rebirth). However, their journey will be no less than a roller coaster ride as they have to fight Aatma Ram (played by Jackie Shroff).

Watch the Phone Bhoot trailer below:

Farhan Akhtar, who is producing the movie under the banner Excel Entertainment, also shared a trailer on his Instagram handle and captioned it as "New business idea lekar aa rahe hai, #Phonebhoot Watch the #PhoneBhootTrailer now!"

Soon after he shared the post, fans flooded the comment section. A user wrote, "Trailer is really entertaining, let's see the movie," while another wrote, "Amazing....superb...."
Here have a look:

Ahead of the trailer, Katrina Kaif shared a stunning picture of herself in a floral print suit. Check out the post below:

Phone Bhootis slated to hit the theatres on November 4.