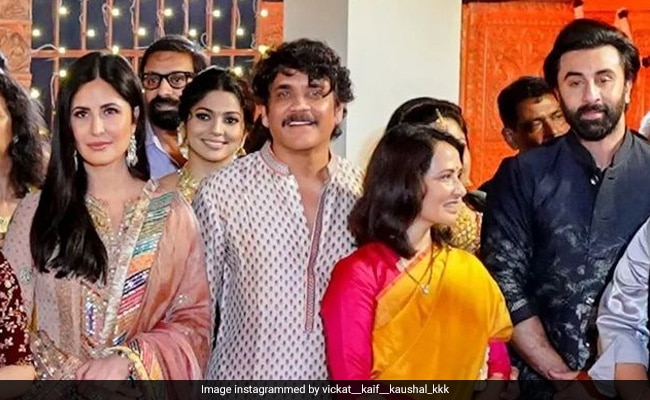 Exes Ranbir Kapoor and Katrina Kaif are creating a heavy buzz on the Internet after some pictures of them from Navratri celebrations went viral. Katrina and Ranbir attended the Kalyanaraman family's Navratri festivities in Kerala. In the viral images, we can see Katrina and Ranbir standing at a distance and posing for the camera with Nagarjuna, his wife Amala Akkineni, Prithviraj Sukumaran and others. Katrina looks pretty in a peach traditional ensemble, while Ranbir looks dapper in a black Kurta and pyjama.

The Kalyanaraman family is the owner of a popular jewellery brand, Kalyan, and every year they host a star-studded Navratri puja at their house.

Katrina Kaif and Ranbir Kapoor fell in love on the sets of Ajab Prem Ki Ghazab Kahani and dated each other till 2016. They have also worked together in several films such as Jagga Jasoos and Raajneeti.

On Wednesday, the Kapoors and Bhatts came together for Alia's baby shower. A while ago, Alia shared dreamy pictures from the celebrations and captioned it as "just ... love," followed by yellow heart emoticons.

Meanwhile, on the work front, Katrina Kaif has several films in her kitty - Phone Bhoot, Tiger 3 and Merry Christmas. Ranbir Kapoor, on the other hand, was recently seen in Brahmastra with Alia Bhatt. Next, he will be seen in Animal and Luv Ranjan's untitled with Shraddha Kapoor.