Alia Bhatt had a baby shower on Wednesday 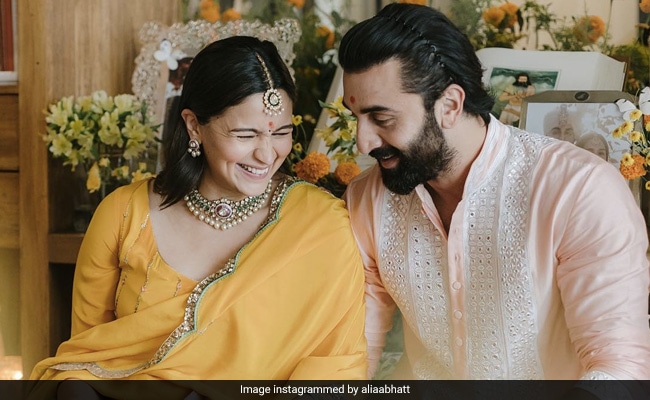 Alia Bhatt took us inside her baby shower with a set of pictures featuring herself, husband Ranbir Kapoor and the family and friends who attended. Three of the photos are of Alia and Ranbir, she in sunny yellow and he in peach and white. Three other photos are divided up between their families and friends - one picture each for the Kapoors and the Bhatts and a third photo of Alia with her best friends, among them Akansha Ranjan Kapoor. The Bhatt family photo shows Alia posing with mom Soni Razdan, dad Mahesh Bhatt, sisters Shaheen and Pooja, and aunt Tina.

The Kapoor group photo is, as expected, more crowded - Ranbir's mom Neetu and sister Riddhima are pictured as are his cousins Karisma Kapoor and Nitasha Nanda. Also in the photo are Shweta Bachchan, who is married to Ranbir's cousin Nikhil Nanda, his aunt Rima Jain and her daughter-in-law Anissa Malhotra, and Shammi Kapoor's wife Neila Devi.

Alia kept the caption for her post simple - "Just... love," she wrote, adding a row of hearts. The baby shower was held at Alia and Ranbir's home in Mumbai apartment bloc Vastu on Wednesday. The guests also included Karan Johar and Ayan Mukerji.

Alia and Ranbir, co-stars of the film Brahmastra, married in April this year.

Alia Bhatt and Ranbir Kapoor began dating in 2017 after being cast in Brahmastra, which released last month. They attended Sonam Kapoor's wedding reception in 2018 as a couple. Ranbir, who is not on social media, makes frequent appearances on Alia's Instagram.

Alia Bhatt has had a bumper year with four releases - in addition to Brahmastra, she received great acclaim for Gangubai Kathiawadi and Darlings, and also appeared in the blockbuster RRR. Alia will be making her Hollywood debut in Heart Of Stone with Gal Gadot. Ranbir Kapoor starred in Shamshera this year, with less success than Brahmastra. His lineup includes Sandeep Reddy Vanga's Animal.