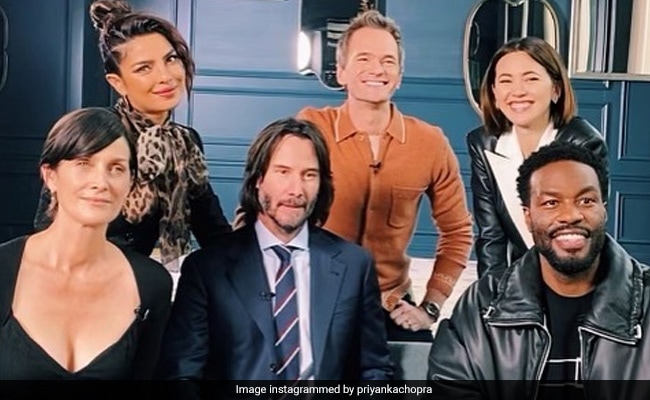 Priyanka Chopra is one busy superstar. The actress, who will be seen in the latest instalment of The Matrix franchise, has been working on a choc-o-block schedule to promote the film. In the process, Priyanka Chopra is rubbing shoulders with Keanu Reeves, who is the face of The Matrix films and other prominent members of the cast. On Thursday, the actress shared a photo of herself with five other actors, calling them her “gang”. Sharing the photo taken in New York, Priyanka Chopra said, “Gang is (almost) all here! Keanu Reeves, Carrie Anne Moss, Yahya Abdul-Mateen II, Jessica Henwick, Neil Patrick Harris and missing Jada Pinkett Smith and Jonathan Groff.”

The picture that was presumably taken between media interactions features the six actors smiling widely for the camera.

The photo of the cast of The Matrix Resurrections was shared by Priyanka Chopra from the third day of promotions. The actress also shared another photo from the day, this time just of herself.  Dressed in a Dolce & Gabbana outfit, oversized earrings and with her hair in a bun, Priyanka Chopra took the glamour quotient up a notch for the day.

On Wednesday, which marked the second day of promotions, Priyanka Chopra sent the Internet into a tizzy with a series of pictures. Decked up in a chic Roberto Cavalli dress and blazer, the actress wrote, “Day 2,” with a snake emoji.

Priyanka Chopra made sure that the fans noticed her from the very first day of promotions itself. She made headlines when she stepped out in a printed figure-hugging dress and an exceptionally long braid. In the caption, she wrote, “Day one of Matrix press week is complete.”

The Matrix Resurrections marks Priyanka Chopra's entry into the widely successful franchise. She will be seen in the role of Sati in the film. The movie is also the first film in the series that will be directed by Lana Wachowski alone. Previously, all The Matrix movies were helmed by the director duo, Lana Wachowski and Lilly Wachowski. The movie is scheduled to release on December 22.