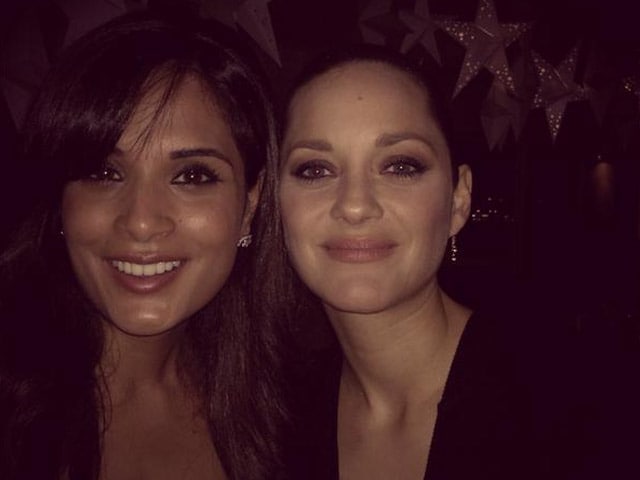 This image was posted on Twitter by Richa Chadha

New Delhi: Bollywood film Masaan, which won big at this year's Cannes Film Festival, has drawn the support from French actress Marion Cotillard, who took it upon herself to promote its release in her country.

Masaan, directed by Neeraj Ghaywan, released in France on June 24, and on the same day Marrion uploaded the French poster of the film on her Instagram page. She captioned the image in French, which read: "Masaan releases today in France after a huge success in Cannes. Produced by Melita Toscan Du Plantier with Richa Chadha in lead role."

Melita co-produced the film with her partner Marie Jeanne-Pascal alongside other Indo-French partners of Masaan.

Thanking Marion for the support, Melita said in a statement: "I've known Marion for about 19 years now. I remember how she was so excited and texted me, asking about the prize Masaan had won. She was on the way to red carpet for her film 'Macbeth'. She is very excited to watch 'Masaan' and is supporting the film."

Richa, who features on the film's poster that Marion has shared, is also ecstatic.

"It's truly magical. I have watched Marion's work for inspiration. In fact, my director Neeraj gave me her film Rust and Bone as research for Masaan. Like many things in this film, it's come full circle again. I am so overwhelmed with her generosity. It feels great to be mentioned by an Oscar-winning actress. We are all touched."

Neeraj said that it's "inspiring to have one of the world's greatest actor come out and support our film".

"I have seen almost all her films and I have huge respect for her craft. I take immense pride and extend my relentless gratitude on behalf of team Masaan," added the director, whose movie won the Promising Future Prize and the International Federation of Film Critics (FIPRESCI) Award at the Cannes movie gala, apart from a five-minute standing ovation at the film gala.

A joint production between Manish Mundra (Drishyam Films), Macassar Productions, Sikhya Entertainment and Phantom Films, Masaan was selected in the UnCertain Regard section at the Cannes fest.

The film also stars Sanjay Mishra, and newcomers Vicky Kaushal and Shweta Tripathi in a story about four people from a small Indian town and how they fit into the moralities.

In India, Masaan is releasing on July 24.