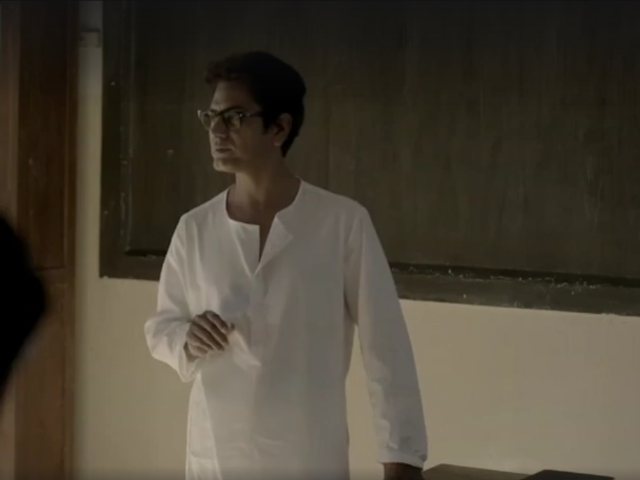 Nawazuddin in a still from Manto

New Delhi: Actress turned filmmaker Nandita Das shared a glimpse of her upcoming film Manto starring Nawazuddin Siddiqui on Facebook. In the 6-minute long clip, Nawazuddin Siddiqui can be seen addressing a classroom and expressing his strong beliefs about freedom of speech in a democracy. Manto, based on the life of Indo-Pakistani writer Saadat Hasan Manto, features Nawazuddin in title role and will focus on the writer's non-fictional work. The film is Nandita Das' second venture as a director. She made her debut as a director in 2008 with Firaaq starring Naseeruddin Shah, Deepti Naval, Nawazuddin Siddiqui, Paresh Rawal, Sanjay Suri and Tisca Chopra. The film premiered at the Toronto Film Festival in 2008 and has travelled to over 50 film festivals, winning over 20 awards.


Manto will also see Rasika Dugal portray the role of Saadat Hasan Manto's wife. Chandan Roy Sanyal, who is known for his roles in films like - Kaminey and D-Day will also be part of the film.

Nawazuddin Siddiqui, who was last seen in Raees starring Shah Rukh Khan and Mahira Khan, shared the first look from his upcoming movie on Twitter on February 2.

Promoted
Listen to the latest songs, only on JioSaavn.com
Nandita Das, who recently attended the Mijwan Summer 2017 fashion show in Mumbai, also told news agency IANS that Shabana Azmi and lyricist Javed Akhtar will feature in her upcoming film. She said: "My next movie is titled Manto. Preparations are going on, Shabana Azmi is acting in it and it is a secret but Javed Akhtar is also part of the movie."

As an actress, Nandita Das is known for her performance in movies such as Fire, Earth, Bawandar, Kannathil Muthamittal, Azhagi and Before the Rains.
(With IANS inputs)