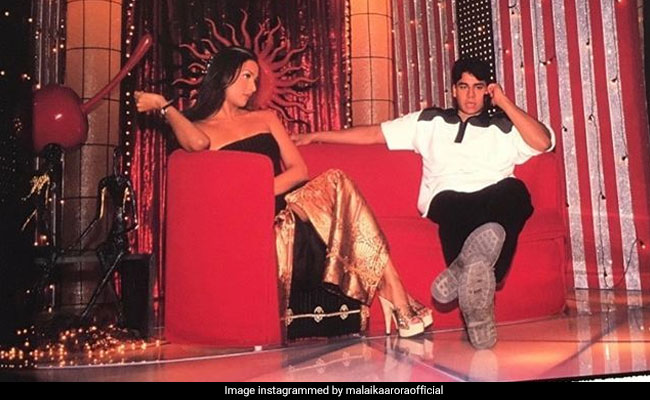 If you grew up watching MTV in the '90s, you will easily recall the show Malaika Arora mentioned in her latest "major throwback" picture that she posted on her Instagram profile. Sharing the picture with her former co-host and TV star Cyrus Broacha, Malaika said that her career actually began with MTV Loveline. Alongside a picture wherein Malaika can be seen sitting on a couch with Cyrus on the sets of MTV Loveline, her caption read: "Now that's a major throwback Thursday ... this is where it all began for me, on the sets of MTV Loveline with the one and only Cyrus Broacha (always looking hungry and waiting to run home)... miss those days .... circa 1998." She accompanied her post with hashtag #gloriousdays.

Malaika Arora used to host MTV Loveline with Cyrus Broacha in the '90s. Because of the show, she became a famous household name, with a massive fan following among teenagers as well as adults.

Now that's a major #throwbackthursday ... this is were it all began for me , on the sets of #Mtvloveline with the one n only #cyrusbroacha (always lookin hungry n waiting to run home )... miss those days .... circa 1998 #gloriousdays#mtvlovelineforver#myredcouch#mtvvjs

Recently, Malaika Arora was trolled for posting a pic with 'unedited' underarms on her Instagram profile. Users, who disapproved of the post, posted comments like 'underarms toh wax kar leti' while those, who supported her, called out hypocrisy and said that 'being real is the new sexy.' This is the post we are talking about:

Malaika Arora is a well-known model and dancer. She has starred in some of Bollywood's most memorable dance sequences such as Chaiyya Chaiyya (1998 film Dil Se), which also featured Shah Rukh Khan and Munni Badnam Hui in 2010 film Dabangg.