Trolls, Spare Malaika Arora Your 'C***p' - She Has No Time For Negativity 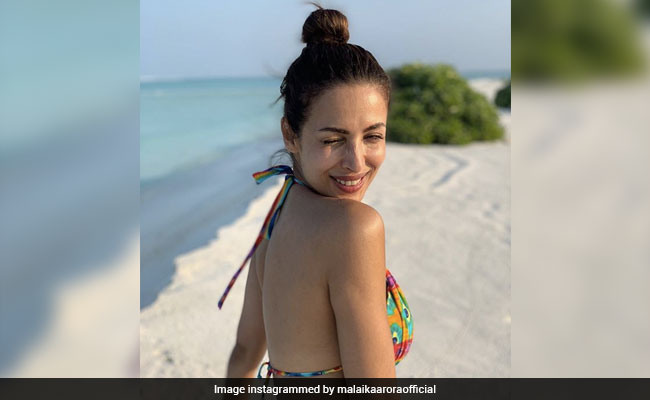 Malaika Arora's recent Instagram post appears to be a sassy response to trolls. The actress-model often finds herself at the receiving end of vile comments for her social media posts and more recently because of her rumoured relationship with Arjun Kapoor. On Tuesday evening, Malaika posted a picture of herself, which appears to be from her last vacation to Maldives and added a caption that read: "Being happy is a choice and I choose to be happy... also I think happiness looks good on me... so, keep your opinions and your negativity to yourself and spare me your c**p." She also added these hashtags to her caption: "#notinterested", "#toobusybeinghappy", "#notimefornegativity", "#tuesdaythoughts" and "#43nhappy."

In the picture, Malaika can be seen winking at the camera with a beachy background at the back. She sports a floral printed bikini in the photo with her hair tied in a bun.

Some of her close friends such as Dia Mirza, Bipasha Basu and Lisa Ray were the first ones to comment on the post, who agreed with Malaika's thought of the day. Take a look at Malaika Arora's new post here:

Being happy is a choice .n I choose to be happy ..... also I think happiness looks good on me ...... so keep ur opinions n ur negativity to urself n spare me ur crap #notinterested#toobusybeinghappy#notimefornegativity #tuesdaythoughts#43nhappy

Earlier, Malaika Arora had posted several pictures from her Maldives vacation with captions such as "A perfect way to begin my day... just dive in" and "Au revoir" when a section of the Internet concentrated on body-shaming her and trolling her for her age difference with Arjun Kapoor.

A perfect way to begin my day .... jus dive in @niyamamaldives #paradise#inlovewithmaldives

Meanwhile, it was speculated that Malaika Arora and her rumoured boyfriend Arjun Kapoor were enjoying their vacation together in Maldives. Arjun Kapoor too had posted pictures of himself from Maldives around the same time with a caption saying: "Here's to you Maldives... To many more sunsets and selfies... paradise island, holiday vibes." The rumoured couple are reportedly looking forward to a wedding this month.

Here's to you Maldives... To many more Sunsets & Selfies... #paradiseisland #holidayvibes

In the past, Malaika Arora has been trolled for posting pictures from Thanksgiving celebrations with some netizens telling her to: "stop being westernised." She was also told to "cover up" after a party picture of hers in a short dress went crazy viral last year.

On the work front, Arjun Kapoor has films such as Sandeep Aur Pinky Faraar and Panipat in his line-up. Malaika Arora was last seen as a judge on talent hunt show India's Got Talent.