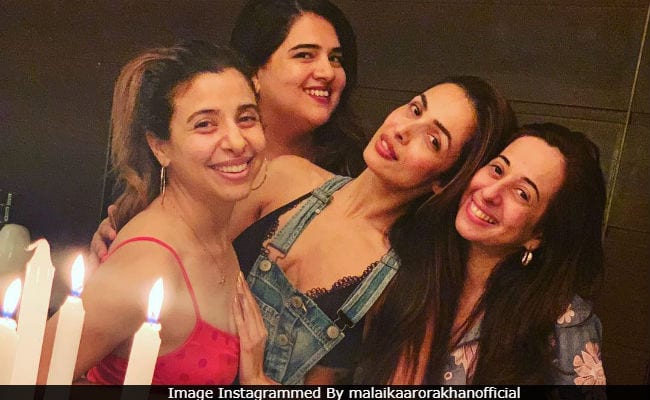 Malaika Arora, who recently shared a picture from her Thanksgiving dinner with friends, has been mercilessly trolled by Instagram users who found plenty to be offended by in her post, from her outfit to the apparently awkward placement of her hand. But mostly, people were outraged Malaika was celebrating an American festival. "Now they celebrate Thanksgiving in India? Stop being westernised," read a comment on Malaika's post. "Celebrities and people like her just want to copy everything from the Americans and show off," read another comment while a third user posted: "Thanksgiving, seriously? American slave mentality." Many of Malaika's followers have jumped to her defence, citing her right to celebrate any festival she chooses and pointing out that Diwali is celebrated globally. Malaika Arora, 45, celebrates several festivals, among them Diwali, Eid and Christmas as well as Halloween, another import from USA, so the trolls need not be surprised.

On Tuesday, Malaika Arora dined with her friends Preeta Sukhtankar, Delnaz Daruwala and Vahbiz Mehta and captioned her post: "So grateful for all the love, relationships and influences in my life. Happy Thanksgiving." On the dinner table, we spotted turkey, roast yam and other traditional Thanksgiving delicacies.

So grateful for all the love ,relationships n influences in my life HAPPY THANKSGIVING

Meanwhile, Malaika Arora has been trending on and off because of reports claiming that she's dating actor Arjun Kapoor. The rumoured couple have been spotted together at a couple of parties and dinner.

Malaika Arora was previously married to actor-filmmaker Arbaaz Khan. The ex-couple divorced in May 2017. They are parents to a 16-year-old son named Arhaan.

Malaika Arora has featured in several dance sequences and co-judged many reality shows. She is best-known for her dance appearances in songs like Gur Naalo Ishq Mitha, Chaiyya Chaiyya and Munni Badnam Hui. She currently appears on the TV shows India's Next Top Model 4 and India's Got Talent 8.