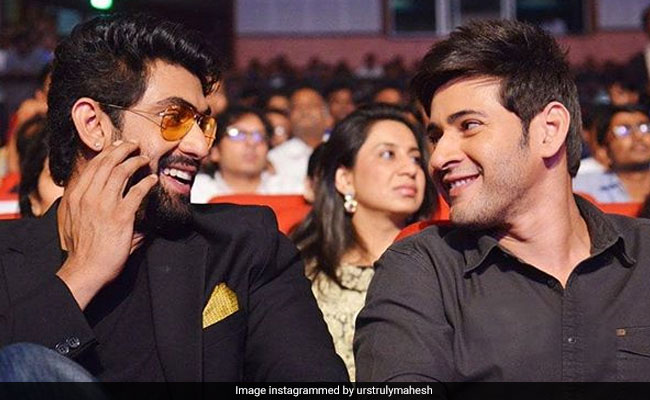 South star Rana Daggubati turned a year older on Saturday and on the occasion of his 35th birthday, his friends from the industry and family wished him on social media. The most special wish came from Mahesh Babu, who shared a picture of himself and the birthday boy on Instagram and accompanied it with a sweet note. In the photo, the duo can be seen smiling at each other. Going by the picture, it appears to be from an awards ceremony. Sharing the picture, Mahesh Babu wrote: "Happy birthday, Rana Daggubati! Wishing you success in everything you do. Have an incredible year ahead."

Happy birthday, @ranadaggubati! Wishing you success in everything you do. Have an incredible year ahead

On the occasion of his birthday, Rana Daggubati raised the excitement level among his fans by sharing the first look of his much-awaited film Virata Parvam. In the first glimpse, he could be seen covering his face with a red scarf. Posting the image, he wrote: "And here is the first glimpse of my next #Virataparvam!" Directed by Venu Udugula, the film features Nandita Das and Priyamani in prominent roles.

In case you haven't seen the first glimpse yet, take a look:

On the work front, Rana Daggubati made his acting debut with the 2010 Telugu film Leader. He made his debut in the Hindi film industry with the 2011 film Dum Maaro Dum and went on to feature in several Telugu, Tamil and Hindi films such as Naa Ishtam, Department, Krishnam Vande Jagadgurum, Arrambam, Baby, Bangalore Naatkal, Baahubali: The Beginning, Baahubali: The Conclusion and The Ghazi Attack. He was last seen in Housefull 4.