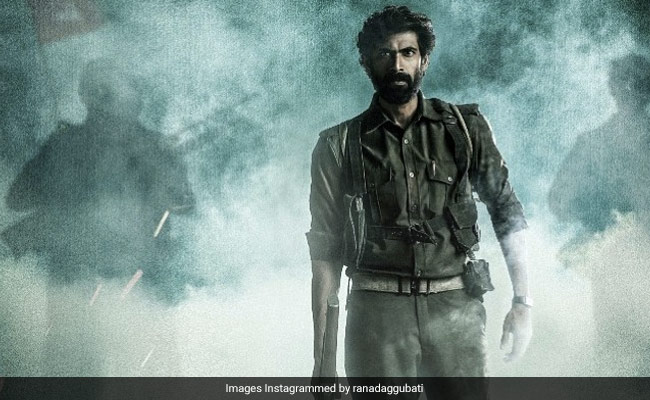 Rana Daggubati, who celebrates his 36th birthday on Monday, shared a brand new poster of his forthcoming film Viraataparvam. In the poster, Rana sports an intense look. He can be seen dressed in a uniform, with a rifle of sorts in his hand. Sharing the poster of the film on Instagram, the actor wrote "already" and added firecracker emoticons. Meanwhile, Bollywood trade analyst Taran Adarsh shared some details about the project on social media and wrote: "On Rana Daggubati's birthday today, team Viraataparvam unveils the new poster." He revealed that the film's final schedule is in progress in Hyderabad. The Telugu film also stars Sai Pallavi, Nandita Das and Priyamani. The film is being directed by Venu Udugula and it is being backed by Rana's father Suresh Babu.

Rana Daggubati is best-known for playing Bhallaladeva in SS Rajamouli's Baahubali series. He has been a part of Telugu, Tamil and Hindi films such as The Leader, Naa Ishtam, Department, Krishnam Vande Jagadgurum, Arrambam, Baby, Bangalore Naatkal, Housefull 4 and The Ghazi Attack. He also starred in the biopic on legendary actor, producer, filmmaker and politician NTR. Rana Daggubati played the role of Chandrababu Naidu in the film.

The actor will next be seen in the film Haathi Mere Saathi, directed by Prabhu Solomon, it will release in three languages - Hindi, Tamil and Telugu. The film has been titled Kaadan in Tamil and Aranya in Telugu. Rana Daggubati married entrepreneur Miheeka Bajaj in an intimate ceremony in Hyderabad in August this year, in the presence of a few family members.