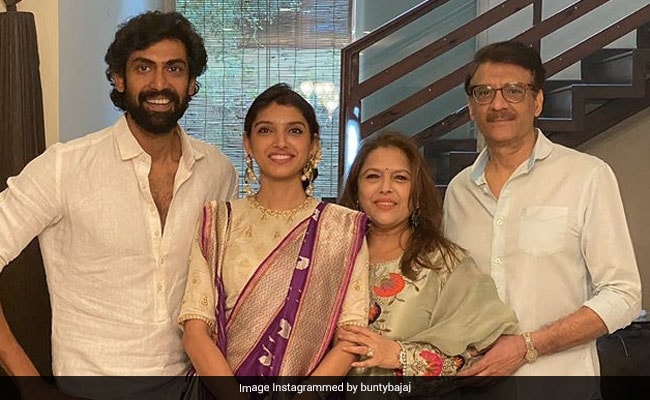 Rana Daggubati and Miheeka Bajaj with their family (courtesy buntybajaj)

Rana Daggubati and Miheeka Bajaj celebrated Dussehra with their family, glimpses of which have been shared on Instagram by Miheeka's mother Bunty Bajaj. "Happy Dussehra," she captioned a family photo, in which Rana and Miheeka can be seen posing with Miheeka's parents. On her Instagram story, Bunty Bajaj shared an adorable moment, featuring just the couple. Miheeka picked a purple saree paired with an off-white blouse for her Dussehra look. She accessorized with traditional jewellery. Meanwhile, Rana was his usual handsome self in a white kurta and denims. Rana Daggubati and Miheeka Bajaj had a grand wedding but with a limited guest list in in Hyderabad in August. This year marked their first Dussehra celebrations as a married couple. 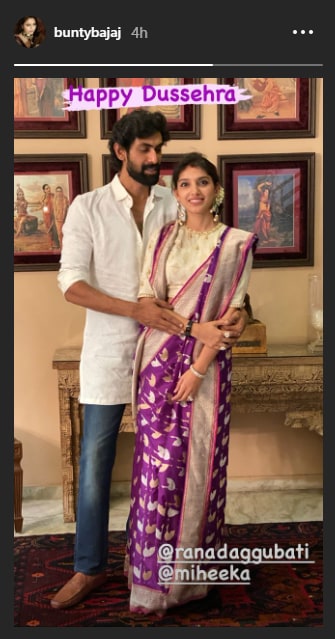 Earlier this month, Miheeka Bajaj shared a selfie with Rana Daggubati from what appeared to be a vacation. "Just because..." she captioned the photo of the two sun-bathing and added the heart icons. Rana Daggubati and Miheeka Bajaj had planned for a honeymoon in Amsterdam, which didn't go as planned because of the pandemic.

A week after their wedding, Miheeka shared a few pages from her shaadi album along with this note to her husband: "My love, my life, my heart, my soul! Thank you for being everything I've ever dreamt of and so much more!! You make me a better person in life. I love you!"

My love, my life, my heart, my soul! Thank you for being everything I've ever dreamt of and so much more!! You make me a better person in life. I love you! 💕 @ranadaggubati

Rana Daggubati, in a delightful surprise, introduced Miheeka as his fiancee in May, days after which the couple had their engagement ceremony. Miheeka runs the interior designing and event management firm Dew Drop Design Studio. She studied Interior Designing at Chelsea University. Rana Daggubati is best-known for portraying the character of Bhallaladeva in the Baahubali series of films. He will next be seen in Haathi Mere Saathi, releasing in January next year.