Nothing Much To See Here, Just A Pic Of 'Tall Happy' Rana Daggubati 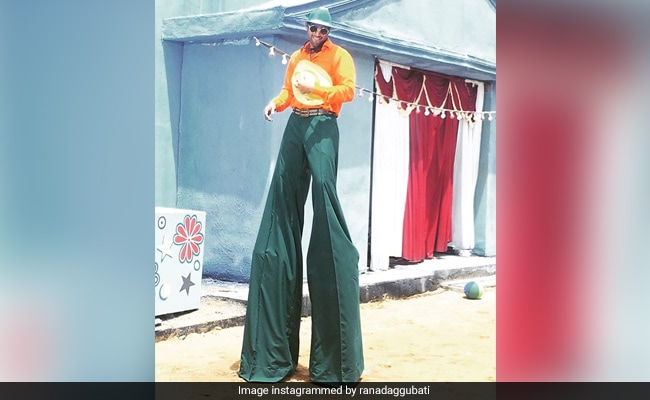 Having a dull day? We bet this epic picture of Telugu star Rana Daggubati will cheer you up. The Baahubali actor, on Friday, shared a hilarious picture of himself on social media and it went viral on social media in no time. In the photo, Rana Daggubati can be seen standing on stilts wearing an orange shirt and long green trousers. He completed his look with a green hat and black shades. Going by the picture, it appears that it was clicked either at a funfair or a movie set. Posting the picture on his Instagram profile, Rana Daggubati captioned it: "Just a tall happy me."

Just a TALL happy me

Rana Daggubati often trends for his unique Instagram posts. Last week, on south star Naga Chaitanya's birthday, Rana Daggubati shared an adorable throwback picture of himself posing with the actor and wrote: "Happy birthday, brother. Have the best one."

Happy happy brother Have the best one @chayakkineni

On the work front, Rana Daggubati made his acting debut with the 2010 Telugu film Leader. Post that, he made his debut in the Hindi film industry with the 2011 film Dum Maaro Dum, in which he co-starred with Abhishek Bachchan and Bipasha Basu. Rana Daggubati went on to feature in several Telugu, Tamil and Hindi films such as Naa Ishtam, Department, Krishnam Vande Jagadgurum, Arrambam, Baby, Bangalore Naatkal, Baahubali: The Beginning, Baahubali: The Conclusion and The Ghazi Attack.