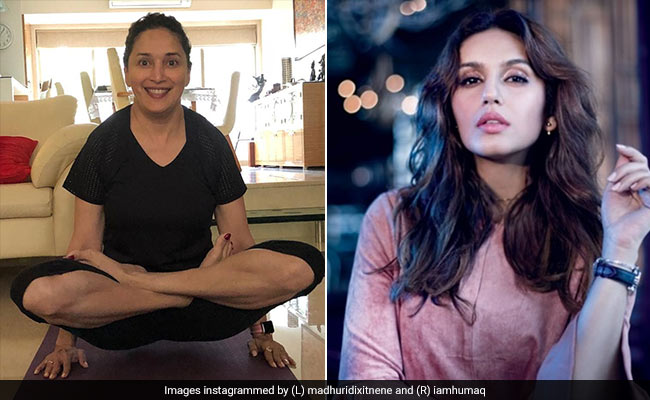 If you are experiencing Monday blues today, then this might cheer you up. In case you missed it, we are talking about Madhuri Dixit's latest upload on her Instagram handle. For Madhuri, performing yoga is all about channeling her inner child, the actress's post says it all. On Sunday, Madhuri posted a picture of herself on the platform in which she can be seen performing kukkutasana (also known as Cockerel Pose or Rooster pose). In the picture, the actress is sporting black athleisure wear. Madhuri's hilarious expressions are a treat to look at as she shows her "goofy" side to her Instafam.

In her caption, Madhuri wrote, "Embracing my goofy side with some yoga. See her post here:

Actress Huma Qureshi reacted to Madhuri's post. She dropped a red heart emoji in the comment section. Huma's comment on Madhuri's picture has taken us back to their film Dedh Ishqiya (2014).

While Madhuri Dixit played the role of Begum Para, the widowed Begum of Majidabad, Huma Qureshi was cast as her confidante Muneera (Muniya) in the 2014 movie. The film also featured Naseeruddin Shah and Arshad Warsi as Khaalujaan and Babban respectively.

Cut to 2013, Huma Qureshi had earlier spoken about working with Madhuri in Dedh Ishqiya. In an interview with PTI, she had said, "I never thought that I was competing with her. I think it is a huge compliment for me that I am starring with her in the film. You can't compete with the sun. There can be no competition."

Coming back to Madhuri Dixit's latest Instagram post, we wonder what her husband Sriram Nene has to say about it.