The song is from Madhuri Dixit and Anil Kapoor's film Tezaab 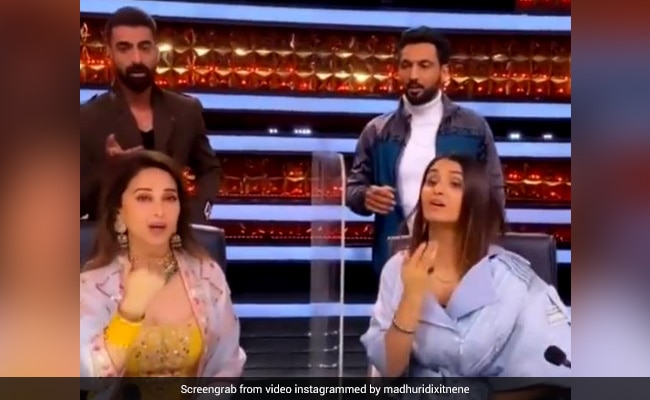 If you are a fan of Madhuri Dixit, then this is a treat to you. Madhuri, who is one of the judges in Dance Deewane 3, a dance reality show, took us back to the 80s. She recreated the song Ek Do Teen from her 1988 film Tezaab on the set of the show. Her Instagram post is proof. The actress posted a video on the platform in which she can be seen dancing to the song Ek Do Teen. She is performing the dance steps without standing. Her expressions are on point too.

Choreographer Shakti Mohan, who is co-judging the show with Madhuri, can be seen matching the dance steps with her. Dharmesh Yelande and Tushar Kalia, who are also judging Dance Deewane 3, can be seen dancing behind Madhuri and Shakti. "Ek do teen," Madhuri wrote in her caption.

Shakti Mohan also posted this video on her Instagram handle. Going by her caption, she is "fangirling" Madhuri. In her caption, Shakti called Madhuri the "Queen of Bollywood" and expressed her fondness for the actress. She wrote, "Queen of Bollywood...Madhuri Dixit Nene ma'am...ahhhhhh...how much I love her...Absolutely unreal to be sitting next to her. I kept fangirling all day..."

Shakti added that she was feeling "creepy" when the video was shot. "...I was definitely creepy but can't help it. She is so awesome. The best ever..."

Ek Do Teen is one of the most popular songs of Madhuri Dixit. Even after decades, it is still enjoyed by her fans. The song was sung by Alka Yagnik.

In terms of films, Madhuri Dixit was last seen in Karan Johar's 2019 film Kalank. Madhuri has previously judged two seasons of Dance Deewane and now she is judging the third season.