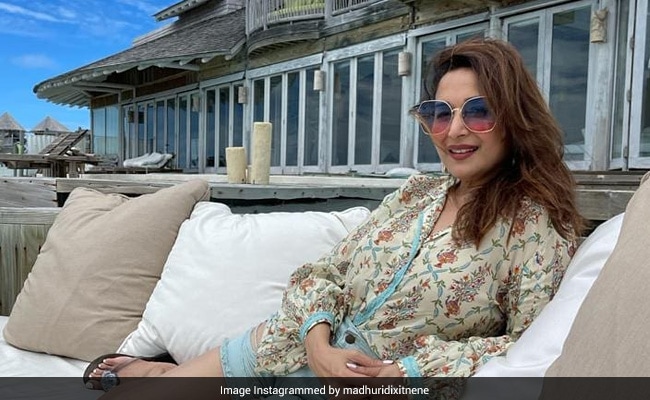 Madhuri Dixit is busy sharing pictures from her Maldives vacation on social media. On Friday, she shared a stunning shot on her Instagram profile. In the picture, she can be seen sitting pretty on a chair as she smiles for the camera. The actress, who can be seen soaking up the Maldives sun, captioned the picture: "Sunkissed." She can be seen dressed in a floral shirt and she paired it with blue denim shorts. She accessorised her look with tinted sunglasses and a bright smile. Her Instafam loved her post and the many heart emojis in the comments section reflect that.

Earlier this week, the actress trending big time after she shared videos of herself dancing with Nora Fatehi on the dance reality show Dance Deewane 3. The duo could be seen grooving to tracks like Mera Piya Ghar Aayaand Garmi. ICYMI, check out the viral video here:

Madhuri Dixit  will soon be making her debut in the digital world with Netflix's upcoming series, which will be produced by Karan Johar. The actress has previously collaborated with Netflix for a Marathi drama titled 15th August, which was her debut project as a producer. In terms of films, she was last seen in the 2019 period drama Kalank, co-starring Alia Bhatt, Sanjay Dutt, Aditya Roy Kapur and Sonakshi Sinha. During the lockdown last year, she released her first single titled Candle.