Madhuri looks every bit of stunning in a metallic chevron lehenga 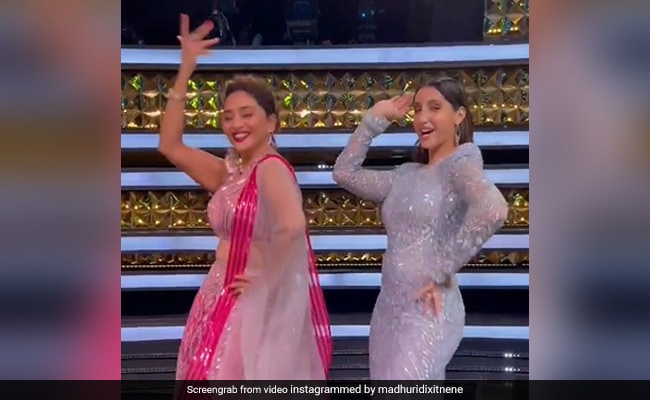 Madhuri Dixit loves to recreate her iconic songs on the sets of reality show Dance Deewane 3, where she currently appears as one of the judges. The actress, on Wednesday, shared a video of herself and dancer Nora Fatehi, who featured on the show as a guest recently, dancing to the track Mera Piya Ghar Aaya from the 1995 film Yaraana, in which Madhuri Dixit co-starred with late actor Rishi Kapoor, Raj Babbar and Shakti Kapoor. Madhuri looks every bit of stunning in a metallic chevron lehenga while Nora can be seen sporting a stunning silver gown. Sharing the clip, Madhuri Dixit wrote: "Mera Piya Ghar Aya" with a dancing icon.

Madhuri Dixit, a couple of days ago, posted a video of herself dancing to the song Ek Do Teen from her 1988 film Tezaab with her co-judges Shakti Mohan, Dharmesh Yelande and Tushar Kalia.

And here are some videos of the actress having a whole lot of fun with veteran stars like Waheeda Rehman, Helen and Asha Parekh on the sets of Dance Deewane 3.

In terms of work, Madhuri Dixit has featured in several hits like Dil Toh Pagal Hai, Devdas, Hum Aapke Hain Koun..!, Khalnayak, Saajan, Tezaab, Beta, Koyla, Pukar, Prem Granth among others. The actress was last seen in Karan Johar's Kalank, in which she co-starred with Sonakshi Sinha, Alia Bhatt, Varun Dhawan, Aditya Roy Kapur, Sanjay Dutt. She has not announced her next film yet.

The actress is married to Dr Shriram Nene and the duo are parents of two sons Arin and Raayan.