Madhuri Dixit Grooves With Her "Rock on" Guitar- See Pic

Madhuri Dixit shared a photo of herself playing the guitar 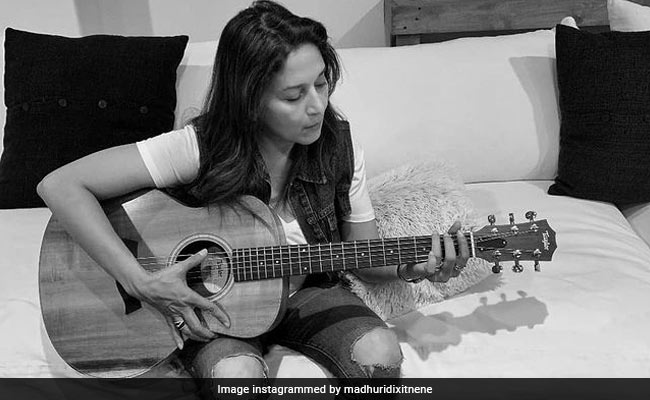 The world is witness to Madhuri Dixit's acting prowess and dancing talent. But not many know that the actress also has a penchant for singing and all things musical. Proving this, Madhuri Dixit gave us major rockstar vibes as she shared a photo of herself strumming a guitar. Dressed in a pair of denim pants, T-shirt and jacket, the star looks stunning as ever in the black and white picture. In the caption, she said, “Music is good for your soul. So...rock on!” She also added the hashtags, “Saturday vibes” and “Saturday mood”. Replying to the post, singer-rapper Rajakumari wrote, “Superstar.”

Madhuri Dixit seems to be in a cheery mood given that her son Arin, is back home to spend the holidays with the family. Arin is a student at the University of Southern California. The actress and her husband, Dr Shriram Nene shared pictures with their son on social media. On Instagram, Shriram Nene shared a photo of the family and wrote: “Arin's back for the holidays! And all of us could not be happier!! He also added the hashtag, “Family over everything."

Along with pictures of her loved ones, Madhuri Dixit's social media timeline is also a treasure trove of stunning throwback images as well as updates about her work. A few days ago, Madhuri Dixit treated us to a "Throwback Thursday" treat by sharing a photo of herself from one of her earliest films. In the caption, Madhuri Dixit wrote, “Beauty in bloom.”

Proving that age is just a number, Madhuri Dixit preceded the vintage picture with a more recent image of herself prepping for a shoot. In the image, Madhuri Dixit is seen getting ready in her green room. In the caption, the actress said: “Beneath the makeup and behind the smile, I am just a girl who wishes for the world.”

Madhuri Dixit is known for her work in films such as Dil Toh Pagal Hai, Devdas, Hum Aapke Hain Koun..!, Khalnayak, Saajan, Beta, and Lajja among others. The actress will be seen next in the Netflix series Finding Anamika with her Raja co-star, Sanjay Kapoor.