Longing To Jump In A Pool? Arjun Rampal's Pic Will Make You Feel Worse

Arjun's pool picture will make you all green with envy 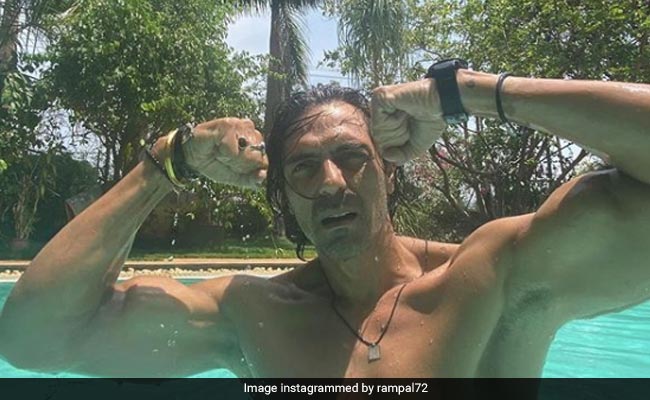 Arjun Rampal, who is currently living with girlfriend Gabriella Demetriades and son Arik in Karjat, Maharashtra, made a splash on Instagram with his latest post. The actor, on Friday, shared a photo of himself chilling in a pool and we bet it will make you all green with envy. In the photograph, Arjun Rampal can be seen standing in the pool and showing off his biceps. Not just the actor's photo but the caption on his post also grabbed the attention of his fans. Sharing the picture, Arjun wrote just two words, which were enough to motivate his fans during the lockdown. "Get stronger," read his caption. Take a look at Arjun's post:

A couple of days ago, Arjun Rampal got rid of his long beard and returned back to "being civilized" again. He shared a series of posts, one of which features him trimming his beard while the other one shows him sporting a "civilized" look. Check out his posts here:

All done, back to being civilised. Yay or Nay? #iseeme

Meanwhile, also check out Arjun Rampal's other posts from his lockdown diaries.

Happy birthday my beautiful jaan. We celebrate today a little and a big one very soon. Love you

Arjun Rampal was earlier married to renowned model Mehr Jesia, with whom he has two daughters - Mahikaa, 17, and Myra, 14.

On the work front, Arjun Rampal has featured in a number of films such as Dil Hai Tumhaara, Asambhav, D-Day, Chakravyuh, Inkaar, Om Shanti Om, Rock On!!, Housefull, Raajneeti and Ra.One, in which he co-starred with Shah Rukh Khan. He was last seen in J P Dutta's Paltan, which also featured Jackie Shroff, Sonu Sood, Harshvardhan Rane, Esha Gupta and Sonal Chauhan.