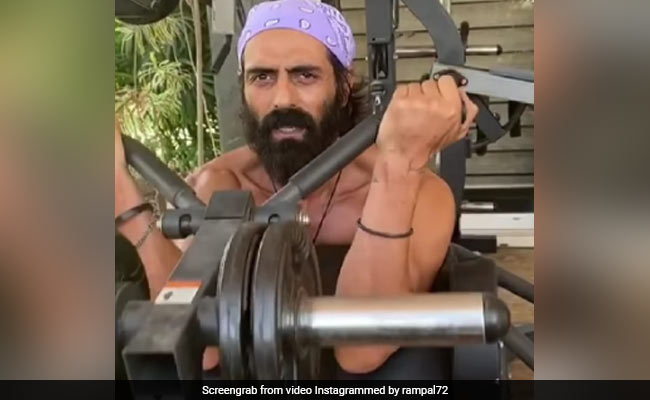 Arjun Rampal in a still from the clip. (Image courtesy: rampal72)

Arjun Rampal, who is currently living with girlfriend Gabriella Demetriades and son Arik in Karjat, Maharashtra, is using the lockdown phase to build his biceps and his latest Instagram entry is a proof of that. The actor, on Tuesday, shared a video of himself working out in his in-house gym and gave his Instafam major fitness goals. In the video, Arjun can be seen lifting weights and in between looking at the camera. Sharing the clip, Arjun wrote: "Finished today's workout with some biceps" and urged his fans to "stay home" and "stay fit." Take a look at the actor's post here:

Arjun Rampal moved to his Karjat house before India went into lockdown. In an interview with mid-day, he revealed that he continued his stay in the town for the safety of his little son Arik. "We decided to stay back for my son's safety. While he is too young now, this will be a story to tell him when he grows older. Besides, Mumbai is just a few hours away, and hence, easily accessible in case of an emergency," the actor was quoted as saying by mid-day.

Arjun Rampal was earlier married to renowned model Mehr Jesia, with whom he has two daughters - Mahikaa, 17, and Myra, 14.

On the work front, Arjun Rampal has featured in a number of films such as Dil Hai Tumhaara, Asambhav, D-Day, Chakravyuh, Inkaar, Om Shanti Om, Rock On!!, Housefull, Raajneeti and Ra.One, in which he co-starred with Shah Rukh Khan. He was last seen in J P Dutta's Paltan, which also featured Jackie Shroff, Sonu Sood, Harshvardhan Rane, Esha Gupta and Sonal Chauhan.